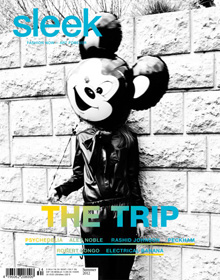 Back in the spring I was asked by Lauren Cochrane to answer some questions for an article about fairy tale inspired fashion for Sleek Magazine. My interview ended up with a short blurb in the article titled "Scary Tales" in issue 34 of the magazine. The article isn't online so I thought I would share the interview with you here. For fun, I will bold and blue the parts of the interview that ended up in the article. It provides a glimpse of how journalism and interviews work, too.

- when did you start your blog?

Heidi: The SurLaLune Fairy Tales website started in 1998 and I added the blog to the site in 2009. It has become a popular place to learn about fairy tales in popular culture.

- have you always been a fan of fairytales?

Heidi: Yes, I have always enjoyed fairy tales and became a greater fan as I grew older and learned more about their histories. Although I also work with children’s literature, fairy tales in their original forms are anything but.

- what do you think is the appeal of them? Is is about escapism?

Heidi: There is an element of escapism with fairy tales, especially as they are often presented by the popular media. However, the tales themselves resonate with their audiences on many levels since the deceptively simple stories allow us to interpret the tales in many ways based on our personal experiences. There is more scope for imagination in their elemental characters and plots, hence such wildly different interpretations between films like “Mirror, Mirror” and “Snow White and the Huntsman.” The most popular, romantic tales have happy endings, yes, but the struggle to get there is often dark and overwhelming, thus the ongoing debate about their suitability for young children. The tales provide hope that we can overcome the hardships of an unfair world and ultimately triumph.

- have you seen the popularity of them grow recently with films like Mirror Mirror etc?

Heidi: Fairy tales are always popular but their visibility is certainly high right now. I’ve seen an increase in interest in Snow White on my site, for example, but Cinderella still trumps her in traffic. People are always aware of the tales—their frequent appearance in advertising illustrates that fairy tales are always part of our public awareness. Overall, the current popularity of fairy tales comes from the success of the fantasy genre the past ten years or so thanks to Harry Potter and Twilight which drew on folklore themselves (edited to "which draws on folklore itself"). Fairy tales are inexpensive as part of the public domain and provide lots of opportunity for writers and other artists to develop a wide range of storylines. The trend for high concept fantasy fairy tales is great right now, but the early 2000s provided several films that were fairy tale inspired, more in the chick lit, modern vein, such as Cinderella Story and Sydney White.

Heidi: I love the influence of traditional textiles and clothing elements, of course. The capes of Miu Miu obviously invoke Little Red Riding Hood while the lace and other traditional patterns and textiles hearken back to the past times found in fairy tales. Some of the more basic designs also recall the simpler peasant clothing of some fairy tale characters, such as Cinderella before she is dressed for the ball.

- do you think it’s about being a fairytale princess?!

Heidi: There will always be an element of wanting to be a princess, of feeling special as our interest in royalty and celebrity illustrates. But the genre is so large and wide ranging that I can’t distill the popularity of fairy tales into that alone. There are also fans who adore the dark, twisted interpretations, preferring the horror, many elements of which exist in the earliest known versions of the tales. Snow White’s mother/stepmother does much worse things to the heroine in other versions of the tale than simply order her death and heart on a platter.

The majority of fans fall into the middle between the extreme romance and the extreme horror. They prefer the stories for their realism—I know that sounds funny when fairy tales have a connotation of happy stories in popular culture—but the tales only have a happy ending, the journey to the end is very dark and dreary with tears and pain along the way. We become heroes of the tales as we read them or otherwise experience them and that is empowering and cathartic.

- why do you think fairytales appeal to fashion designers?

Heidi: Designers enjoy the romance and want to appeal to their audience, of course, which means using popular trends for inspiration. But the possibilities for using different cultures and fashion histories is great when the term “fairy tale” is invoked. I’ve seen designers use Russian fairy tales, French fairy tales, etc. as inspiration which means they can use a multitude of cultures and still be on trend. In popular culture, if it is romantic and feminine it equates with fairy tales which gives designers a lot of leeway. We are living in a time when women are more empowered but still allowed to be more feminine than in other recent decades where gender neutral clothing was used to mask gender. The abundance of lace and more traditional patterns and florals makes for pretty clothing that women enjoy and feel attractive wearing.

In a lesser known fairy tale still very popular in France, Donkeyskin hides behind rags and animals skins to make herself unattractive and untouchable as she forges out into the world alone. Yet she uses beautiful dresses to claim her royal birthright and achieve her place as a queen and leader. Beautiful clothes provide her with positive attention, something most of us desire. These designers create beautiful clothing for a variety of tastes and we want to wear them to demonstrate our own attractiveness and power.
Posted by SurLaLune Fairy Tales at 9:30 AM