Edited 9/23/2012: I have a new post with a preview of the seven products from the line at Big Preview: Disney Cinderella Collection by Sephora.

And here's a teaser trailer which hardly references Disney at all but definitely references Cinderella herself, at least the Perrault version: 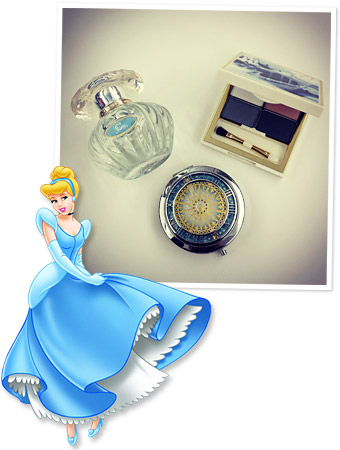 Courtesy of Disney and InStyle/Instagram

Cinderella is having a stylish year! Not long after Christian Louboutin gave her glass slippers a couture revamp, Sephora teamed up with Disney to create a limited-edition collection inspired by the princess. We got a sneak peek at the lineup, and we’re loving the regal perfume, four-shadow palette, and compact mirror, shown here. Also included: A six-piece nail polish set, four lipsticks, a roll-on fragrance, and a 20-shade palette inspired by the colors used in the animated film, all of which will land in stores this October. Plus, Sephora will roll out two more Disney princess-inspired collections, so be on the lookout for those in spring 2013 and fall 2014.


And that is a pretty compact. A pretty trinket that resembles a pocket watch but is of course referencing Cinderella's midnight deadline. I, of course, am most interested in the nail polish colors and names. Should be interesting. This is all part of a bigger Disney Princess line in the works at Sephora apparently.

If you shop at Sephora and are a Beauty Insider, you can also get passes for a screening of the Cinderella re-release. The offer comes in a Sephora email.