is available as a Kindle ebook for only $2.99 today only.  Amazon has started offering several ebooks each day for $2.99.  This week has featured several titles published by McFarland. The paperback edition is $35.00 so this is a considerable savings. Remember that you don't have to have a Kindle to read a Kindle book, you can load the free software on your PC, Mac, smart phone and other devices. If you buy the book, it stays in your permanent library whether you download it to a device right away or not.

To conclude, here's the paperback link

if you are interested in that instead although it is regular price.

Thank you for your SurLaLune birthday wishes!

World of Opera on NPR recently offered a great feature on La Cenerentola at A Fairytale Grows Up: Rossini's 'La Cenerentola'.

So it's not surprising that it was Gioachino Rossini, the master of bubbly comedies with poignant moments scattered among the laughs, who composed the most popular operatic take on Cinderella — La Cenerentola. It's one of Rossini's funniest operas, but with a serious side to remind us that the happy ending to Cinderella's story wasn't just a gift from some benevolent fairy. On her journey from servant's quarters to a princess' throne, she faces some real dangers. In overcoming them, she displays a gentle and tolerant spirit, some profoundly adult insights, and the pluck and courage to defy everyone who stands in her way.

On World of Opera, host Lisa Simeone presents La Cenerentola in a production from one of the world's foremost celebrations of Rossini's genius, the annual Rossini Opera Festival in Pesaro, Italy, the composer's hometown. The stars are soprano Kate Aldrich as Cinderella and tenor Lawrence Brownlee as her Prince Charming, Ramiro, with baritone Paolo Bordogna as Don Magnifico.

There is a synopsis of each act as well as shorts from the opera to listen to along with some images. It's a nice way to become familiar with the opera if you are interested. I was amused by the labeling of 'Non piu mesta' as the hit single from the opera.

In the opera's final scene, Cinderella (mezzo-soprano Kate Aldrich) is left to decide the fate of her abusive family. She forgives them, then sings the spectacular aria 'Non piu mesta' — 'No longer sad' — with the chorus joining in to praise her generosity.

Posted by SurLaLune Fairy Tales at 9:00 AM No comments:

Yes, twelve years ago today, having just received my M.I.S. and feeling rather at a loss for future employment, I decided that I wanted to further develop my student project of an HTML annotated Bluebeard as at least a temporary hobby by expanding into other tales and building several new pages over several days then launching them to a public server.  The rest is history, as they say. The jobs have come and gone but SurLaLune has hung with me as well as the husband I picked up much earlier that year.  1998 was a really good year for me despite all of the upheaval and changes or perhaps simply thanks to them.  I shared the story in more detail last year at Happy Birthday, SurLaLune!

This blog has also flourished and along with the books has become my primary focus. The site is updated in bits and places, but not much is added to it in bulk at this point. I still have dreams of adding a fiftieth and final annotated tale, since I am an even number type, but that's not anytime soon.  The books get priority at this point.
Anyway, I want to thank everyone for their support and readership.  The blog has hosted visitors from 150 countries this year while the main site has hosted 213 countries. I never imagined a world audience when I started this but there is one many of whom who have shared that this information would be unavailable to them any other way due to limited resources.  In the end, SurLaLune wouldn't exist if I didn't have someone to share it with for I would just crawl away and read more for pleasure than sharing. This little project of mine has now existed for almost a third of my life.  Next year it will officially be a third, so do the math and learn my age....
This week is a horrible week for an anniversary/birthday celebration.  I feel sorry for anyone with real birthdays this week.  Unless you love it.  What do I know?  Anyway, I am traveling. Most of you are away or otherwise indisposed by holidays and/or weather.  So to make up for the slow internet traffic and other distractions, I will be having some giveaways in January--and I will finally send out the books I have already promised people, too--as well as launching the previously discussed SurLaLune Book Club. Remember to go check out or buy your copies of Sisters Red for January, My Mother She Killed Me, My Father He Ate Me: Forty New Fairy Tales for February and A Tale Dark and Grimm for March.

(Covers below because those are some delicious covers.  You should also see the cover for Jackson Pearce's next release, Sweetly.

Not part of the book club (yet) but I had to share after seeing it for the first time today.  Can you guess the fairy tale?

Posted by SurLaLune Fairy Tales at 5:00 AM 6 comments:

Merry Christmas to All

Merry Christmas to those who celebrate this season and Happy Holidays to those who don't.  One loveliness of SurLaLune is its variety of readers from all over the world.
Posted by SurLaLune Fairy Tales at 10:00 AM 3 comments:

I am not much of a makeup wearer although I have a strong fetish for nail polish since I can see it and play with it.  (I'm not the only one since nail polish sales have thrived during the recession.)  Anyway, on occasion, makeup lines will do fairy tale themed releases and make me wish I wasn't allergic to almost everything on the market.  I cover the collections here on the blog when I find them, especially the nail polish, click the "makeup" subject tag to see more.

The most recent is the Alima Holiday 2010 LE Fairy Tale Collection. It is actually broken down into two subcollections: Once Upon A Time and Happily Ever After.

What fascinates me the most about these collections is the naming conventions.  They are almost always the same.  Popular choices for almost any collection: Glass Slipper, Fairy Godmother, Poison(ed) Apple, Prince Charming and Enchanted Forest.   This particular set uses "The End" and "Spun Gold" which is more unusual. 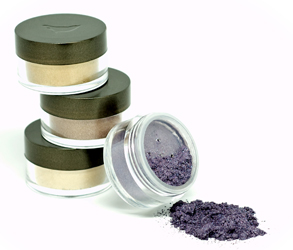 Description for Once Upon A Time:

Celebrate this holiday season in Fairy Princess style! “Once Upon A Time,” a beautiful princess discovered four gorgeous eyeshadows that helped her overcome evil and be the darling of all the holiday parties.


•Fairy Godmother is a medium purple with a generous serving of silver sparkle.

•Spun Gold is a deeper golden shade (that may or may not match the princess’ golden locks). 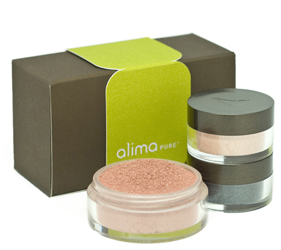 Description for Happily Ever After:

Dark magic attempts to thwart our beautiful princess, but of course good magic is stronger, and she is able to use the Poison Apple to her advantage. As in all fairy tales, the princess lives “Happily Ever After” with some new tools at her disposal.


•Poison Apple is a rosy blush with a peachy shimmer.

•Magic Wand is a magical, do-anything nude shimmer with multi-toned sparkle that can be worn on the eyes, cheeks or décolleté.

•The End is the final touch, an almost-black eyeliner, sparked with diamond-like silver shimmer.

Each set is available for $25, with $2 from each set going to The Global Fund for Women.

The Body and Soul and Phyrra blogs have reviews of the lines with more photos of the colors.

Now I wonder if there will be more releases as fairy tales become more and more visible in pop culture over the next few years with the slew of upcoming film releases as well as a television series.
Posted by SurLaLune Fairy Tales at 5:00 AM 1 comment:

Okey dokey then.  The voting ended up with a tie so I was forced to resort to ye olde coine toss as predicted. The results are that we will be reading Sisters Red by Jackson Pearce for January.  February will be

My Mother She Killed Me, My Father He Ate Me: Forty New Fairy Tales edited by Kate Bernheimer.  Yes, it is a shorter month for a longer book but my thinking is that we can start the longer book in January and have time to finish it before the end of February so I didn't argue with ye olde coine.

And then because it came in third and I want to read it, A Tale Dark and Grimm

by Adam Gidwitz will be the read for March 2011.  This one has been really, really burning up the internet with positive reviews.

January 2011: Sisters Red by Jackson Pearce
February 2011: My Mother She Killed Me, My Father He Ate Me: Forty New Fairy Tales edited by Kate Bernheimer
March 2011: A Tale Dark and Grimm

We'll resume voting for the next titles after that. If we make this work! I hope it works...

The next question is do we want to actually have a chat for the book club or simply set up a conversation on the SurLaLune Discussion board or elsewhere?  I know there are other ways to meet and chat but I haven't investigated them yet.  I am more concerned about schedules.  No one visits this site at the same time. Live conversation is nice, but we will probably get more participation if it is simply a running conversation over a week....also allows people to think and come back with new thoughts, too.
Posted by SurLaLune Fairy Tales at 2:58 PM 3 comments: