Meagan Kearney's Beauty and the Beast 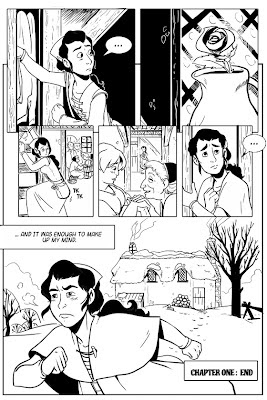 Megan Kearney has launched her new web comic of Beauty and the Beast online.

Here is also the teaser trailer which has been languishing on my blog to do list. (Regular readers would probably want to cry over this list even more than me. And that's just the stuff I copied or wrote down the last several months. Aargh!) But better late than never and since this just launched, I'm not even that late, at least on this one, thank goodness. (Congrats Megan on launching your product. Feels great, right?)

Raised with a healthy love of books and storytelling, and an unhealthy love of comics and cartoons, Megan's twin passions led her to earn her BA in visual arts, with an English minor, from the University of Windsor (during which time she also self-published her first comic) and then to Sheridan College, where she earned her BAA Honours in Animation, and produced her fairy-tale inspired short film, Once Upon a Winter Wood.

Megan has been fascinated with the story of Beauty and The Beast since she was a teenager, living in at the edge of the forest in a small town, surrounded by rosebushes. She currently resides in the equally enchanting Toronto, with her fiance and at least one rabbit.

The power of the tale [Beauty and the Beast] comes from its evolving meaning. what was born as a story discussing arranged marriage has mutated and grown with each retelling, finding relevance in many social climates. It continues ot change and rearrange itself today. Just as the women of Louis XIV's court spoke of their own lives through fairy tales, this comic is one woman's exploration of what Beauty and The Beast means to her.