The Cry Baby by Renata Hopkins is the winner of the New Zealand Listener's Brothers Grimm story-writing competition. Congrats to Renata Hopkins for a fascinating story! You can read more about her in the 4th post for today.

I enjoyed the last lines most of all:

They didn’t live happily ever after. But they did their best.

You can read the entire story on the site but here are the first few paragraphs to whet your interest. From The Cry Baby by Renata Hopkins:

Once upon a time, there was a man and a woman and they did what men and women do and then there was a baby. Such celebration! Booties, bibs and bears were bestowed, all pink and fluffy and smelling of baby powder. The assembled rellies cooed over tiny fingers and toes and then they left the new parents alone with their infant. Who began to cry. And cry and cry, until her face was puce. The mother and father rocked and shushed and bounced and sang to their squalling babe, but day after day, night after night, the din continued. At least the mother and father had each other, until they didn’t, because the father had to go up country for work. As his car drove away the mother fought the urge to chase it. All that day the clamour continued and by nightfall the mother was in a trance. She rocked and shushed and bounced and sang, but the baby was inconsolable. The cry was like another entity in the small house and the mother began to feel that it meant her harm.

Close to midnight, the desperate mother bundled the wailing girl in a blanket and carried her outside, hoping a cold and twinkling sky would bring some peace. Outside, a windbreak of pines stood like a row of witches’ hats and the eye of the moon shone down. The child took another breath and howled afresh. Though she wouldn’t have called herself the praying sort, the mother invoked any power that might aid her. “Please,” she begged. “Please make this noise stop.” Almost immediately she heard a noise from the darkness: a rustling, then a rasping voice. “What’s in it for me?” wondered the voice. The startled mother followed the sound and saw, on the high branch of a pine, a pair of glowing eyes. A possum. “Anything you want,” replied the mother, too delirious with exhaustion to wonder at a talking marsupial. “If you can make the crying stop, anything.”

And since this is rather spoilerish but may encourage you to read the story, here's the words of Judge Kate de Goldi. It also lets you know some of the tales that inspired the story.

The winning story was a stand-out: The Cry Baby is a superb mash-up of Rumpelstiltskin, Clever Gretel and another old story that hovers in my head but which I can’t quite catch. The writer is completely in charge of tone, pace and structure. The sentences are musical, the vocabulary simple but freighted – contributing to the sense that this is a story that might have been told over and over again by many voices through the centuries.

The cast is kept dead simple: a mother, a baby, a witch – brilliantly transmuted into a possum (the possum appeared many times as baddie but this story easily did it the best). And the problem at the heart of the story is both simple and potentially devastating. It is in this way that the writer mines the “latent truth” of the story: the twinned emotions a mother may have for a new baby – desperate love and desperate fury.

There is sly humour (the possum’s voice is wonderfully contemporary but it has a glaring grammar slip; it is also impatient in a way that one somehow sympathises with). The story manages the swift temporal and geographic movements that fairy tale demands, but somehow never seems hurried. The baking of the substitute bread baby is rendered most sensually, the vanquishing of the possum is bloody, violent and deeply satisfying. Above all, the primitive nature of new maternity – in all its complexity – is thoroughly and lingeringly evoked. 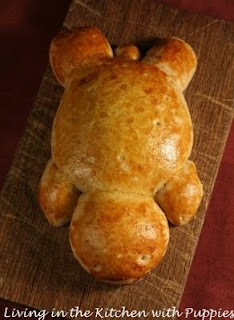 Photo Credits: Living in the Kitchen with Puppies blog (with a dough baby recipe, no less!) I saw this and just had to share. 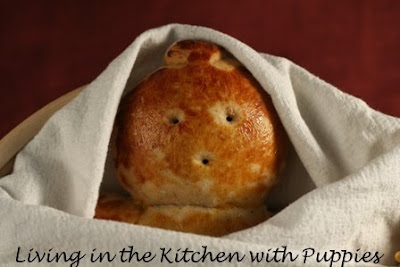 Posted by SurLaLune Fairy Tales at 4:04 AM