BOLO: SurLaLune and Snow White and the Huntsman 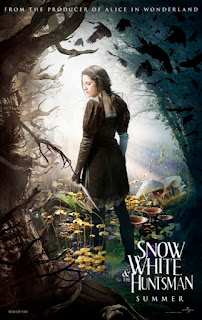 So, back in June, I was having a really rough week. There's been quite a few of those around here since February, but that was one of the worst. And, yes, most of this stress has been blessed stress--new house, big work projects, big home reno projects, family visits--but it has been stress all the same. That week's stress also contained bad stress, such as the end of a house contract that had really turned into a swindle made worse with bad advice.

But enough about that. Let me tell you more about one of that week's highlights more pertinent to the SurLaLune blog. Out of the blue, I received an email asking if I would be the "expert" for a short on the DVD release of Snow White and the Huntsman.

After I picked myself up off the figurative floor from laughing--me? an expert?--it took me more than a few minutes to match myself with anything resembling that role. I also fact checked the production company to make sure no one was trying to pull a fast one over on me. Again. It had been a theme that week, after all. And I get a lot of strange email.  Great, wondrous email, too, but mostly strange.

My fears allayed, I then had to remind myself that I have edited a book, translated some tales and read A LOT of Snow White tales and history over the years, many more than the 40 that appear in Sleeping Beauties: Sleeping Beauty and Snow White Tales From Around the World

. I know more than the average bear about this tale although expert is a label I still shun.

I accepted but for once had to turn down a trip to LA for filming. I had just returned from a difficult journey to San Francisco at the beginning of June and local obligations further made me reluctant to jump on a plane to see my former home for I did live in LA once upon a time. My producer agreed to travel to me instead and find a place to film since my new home was still in shambles, too.

Numerous recommendations and arrangements were made. Questions were vetted. A call sheet was issued. I arrived for makeup and hair an hour before filming. Then I spent a little over an hour discussing Snow White tales and a little bit of the film--which I had to rush out and see first, having been kept from the theatre by travels and other obligations. I relaxed after a few minutes--stumbled over a few pronunciations--paused for a few traffic noises and air conditioning breaks since we were experiencing the hottest days on record in Nashville. Then it was a wrap.

And, according to producer Karina, my film turned out well and ended up in an exclusive extra titled "History of the Fairy Tale" or something similar. It consists of mostly the director's talking head, images of old fairy tales, clips from the film, and my talking head.

The only catch is that the extra will only appear on an exclusive retail disc for a major retailer--and neither the producer nor myself know which retailer that is. The most likely candidate is Wal-Mart but perhaps Target and maybe even somewhere else, but Amazon is unlikely as convenient as that would be for me linkwise and purchase-wise. To reiterate, it will be an exclusive extra, on an extra disc for a major retailer, still unknown.

Am I nervous? Yep! I only hope my brain got it right. Yes, I edited the book. I do know Snow White but it wasn't fresh knowledge since I've been working with Cinderella and Beauty and the Beast the last few years since Sleeping Beauties was published. I spent the day before the shoot rereading my own texts, I admit, refreshing my brain. After all, that project is the one which helped me overcome listing Snow White as my least favorite of the popular fairy tales. I'm sure I made mistakes but I hope they ended up on the cutting room floor! There's probably five minutes of me, tops, cut out of that hour of talking so it will be fascinating to see how I was edited.

And your BOLO* assignment, if you choose to accept it, is to discover which retailer has the exclusive disc. I will announce it here, of course, when the mystery is solved, but you dear readers are more likely to see it before I do. Be on the lookout for me. For me literally and on my behalf for discovering where the disc can be bought. I have a few people who want copies, those wondrous types like parental units and family and friends and other extraordinary people who fill my life.

And that is how I spent a small fraction of my summer "vacation."

*BOLO: Be On the Look Out. I read too many mysteries in my spare time.
Posted by SurLaLune Fairy Tales at 4:01 AM