Black Swan, White Raven by Ellen Datlow (Editor) and Terri Windling (Editor) is on sale for $1.99, down from $6.15 in ebook format for the first time (to my knowledge). As I've said before, I have a hard time justifying rebuys when I own a hardcover and paperback edition of the book already, but $1.99 always lets me except that frugal policy.

Only five of the six books in this series have been digitized. Four have now had sale prices at some point--and I've shared those sales on the blog here--so just one more to go, Black Thorn, White Rose! And it is worth the full price if you don't own it yet, of course.

These books were part of the inspiration for SurLaLune's creation many moons ago. Hopefully someday the sixth missing book, Snow White, Blood Red, will be digitized but that may never happen since most likely reprint rights are standing in its way.


Book description--Note, the book description for the Kindle edition is for the wrong book, so I grabbed this from the paperback (and I corrected several misspellings in that one!):

The award-winning editors of Snow White, Blood Red return us to distinctly adult realms of myth and the fantastic -- with eighteen wondrous works that cloak the magical fictions we heard at Grandma's knee in mantles of darkness and dread. From Roger Zelazny's delightful tale of Death's disobedient godson to Peter Straub's blood-chilling examination of a gargantuan Cinderella and her terrible twisted "art," here are stories strange and miraculous -- remarkable modern storytelling that remold our most cherished childhood fables into things sexier, more sinister . . . and more appealing to grown-up tastes and sensibilities.

Posted by SurLaLune Fairy Tales at 9:31 AM No comments:

I Return and I Revisit The Cat, the Dog, Little Red, the Exploding Eggs, the Wolf, and Grandma

Hello everyone! No, the SurLaLune Blog isn't dead--it has only been neglected the last several weeks as a family medical crisis and a few demanding projects sucked every moment of my time, energy and sanity into their vortexes. I may not post regularly the rest of the month yet, but I really wanted a new post out there for the world to see I am still here. She's alive!

I first reviewed The Cat, the Dog, Little Red, the Exploding Eggs, the Wolf, and Grandma

by Diane & Christyan Fox almost two years ago. This past weekend as my four-year-old nephew and six-year-old niece stayed over for a sleepover, I desperately combed my shelves for "new(ish) to them" books they would both enjoy. They are well and widely read so that is a challenge, especially if I am looking for books short enough to keep bedtime a reasonable hour. Even my hundreds of picture books were at a lower batting average for our immediate needs Friday night. Fortunately, Kensie doesn't think picture books are below her, but just loves words however they are presented. Yay her! Although she would prefer to have the long, long fairy tale picture books read to her, her brother isn't that interested or patient with those unless there are trucks involved.

Well, this was one of the books that successfully came off the shelf--getting laughter and giggles from both of them--and was demanded as a reread, especially by Clark. He ran up to me the next morning with, "You said you would read this one again in the morning." So we did. He laughed some more and thought it was great fun that Dog thought of Little Red Riding Hood as a Superhero story. He understood all of the humor, laughing without prompting, so he is the perfect age for it now. Kensie had a few triumphs as she was able to read some of the lines herself, too.

From my previous review, which I still stand by especially after testing it with some more kids:

This is one of those picture books that works better for the older kids instead of the preschool set thanks to the humor. With lines about "bad fashion sense" and "kindness rays" and even "exploding eggs," reading this book to a younger preschooler will lead to just as many interrupting questions as the dog himself asks in the story.

So most kids under four-years-old won't appreciate the humor. The text also works well as a read aloud, but the illustrations don't accommodate a story time setting either, say in a kindergarten or 1st grade classroom. But honestly, it will be best appreciated by literate kids who can get some of the jokes on the pages by themselves, such as the Cat's checklist. So it's a read aloud with one or a few children who are a little older and will get the humor. That said, the humor is fun and it's a good book. I'll share a video and illustrations below. A good buy for libraries and an amusing fractured fairy tale interpretation of Little Red Riding Hood for classrooms. Parents with kids who like to ask a lot of questions will also enjoy it out of sympathy for the cat.

A comical twist on "Little Red Riding Hood" told by Cat and Dog!

Cat starts reading "Little Red Riding Hood" and explains, "It's a story about a little girl who always wears a red cape with a hood."

Cat says, "She doesn't have any special powers. It's not that kind of a story."

And then the fun ensues!

The zany, fun back-and-forth of Dog and Cat celebrates the joy of reading -- and questioning. Young children will cheer Dog's persistent questions as well as Cat's dedication to keep telling the story. 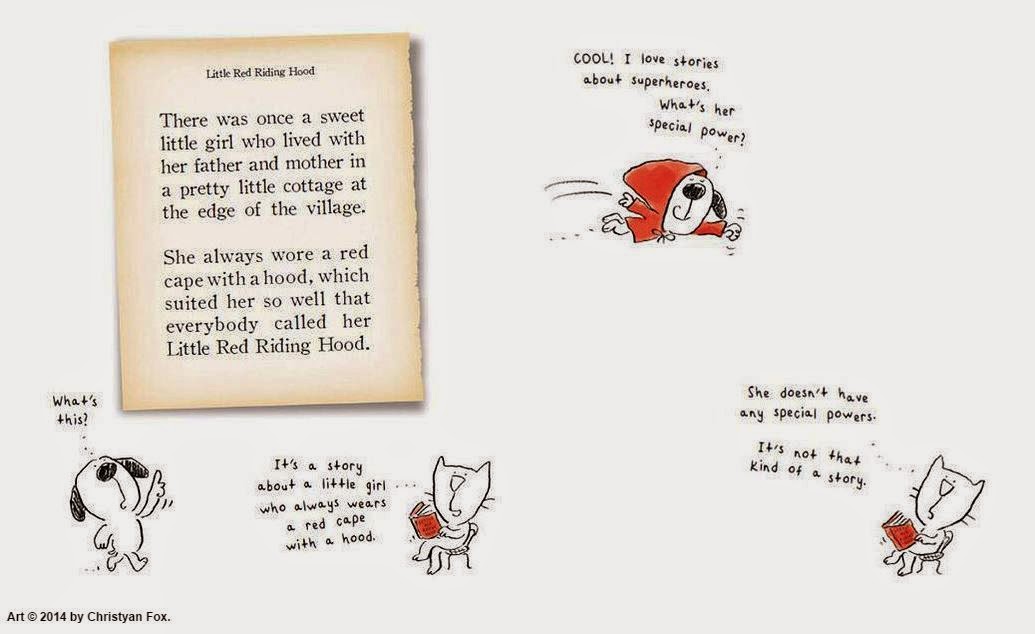 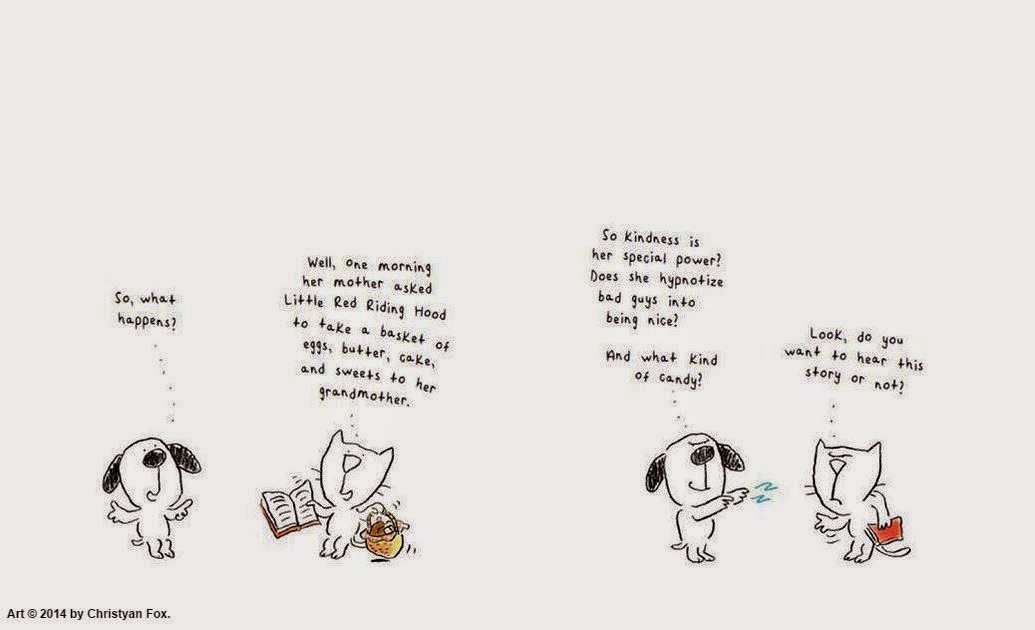 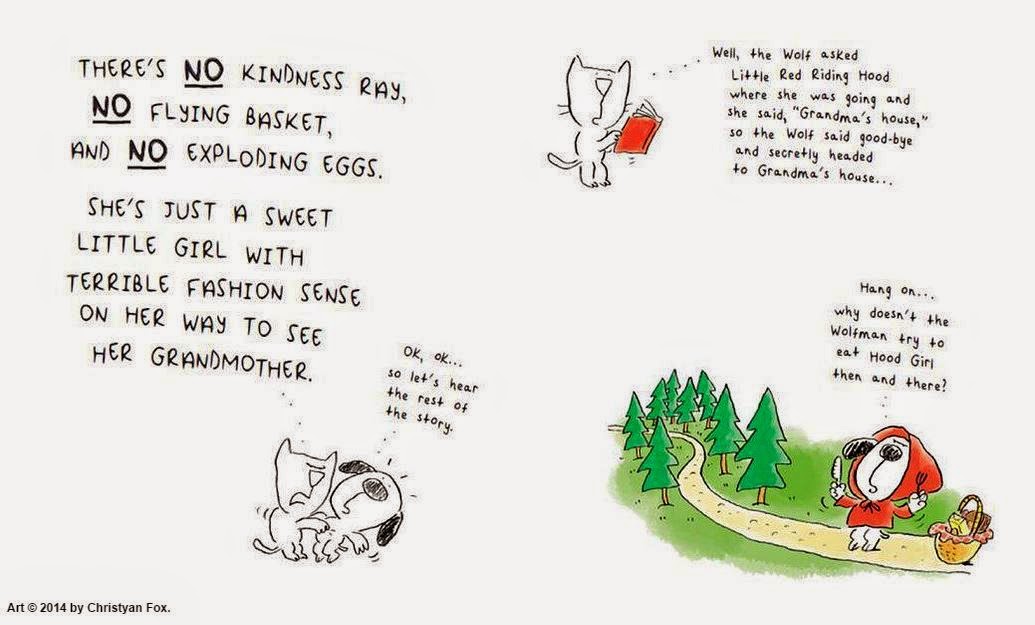 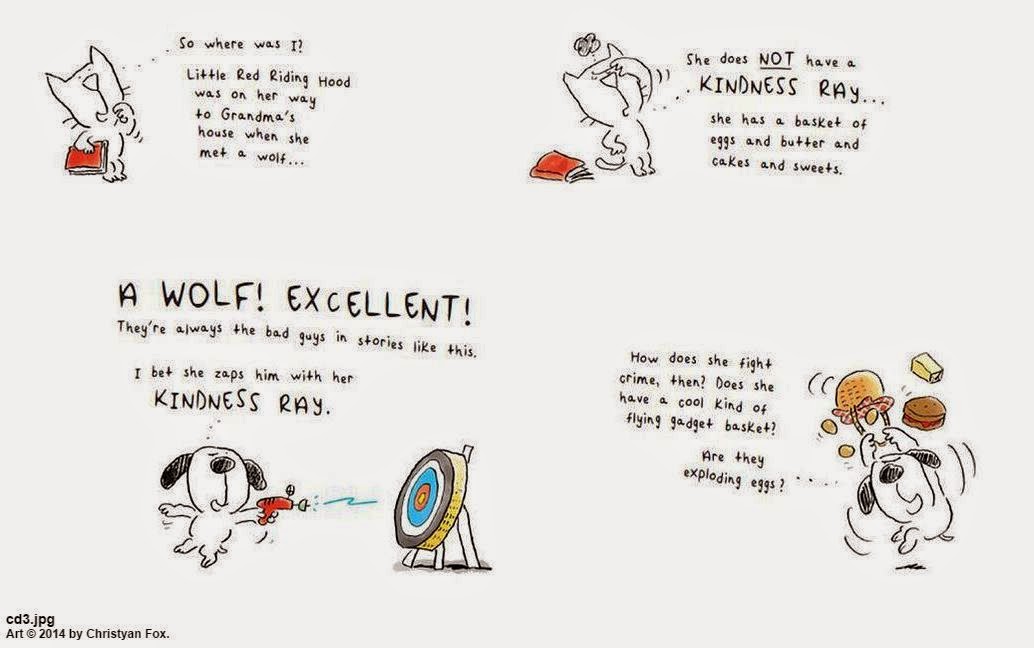 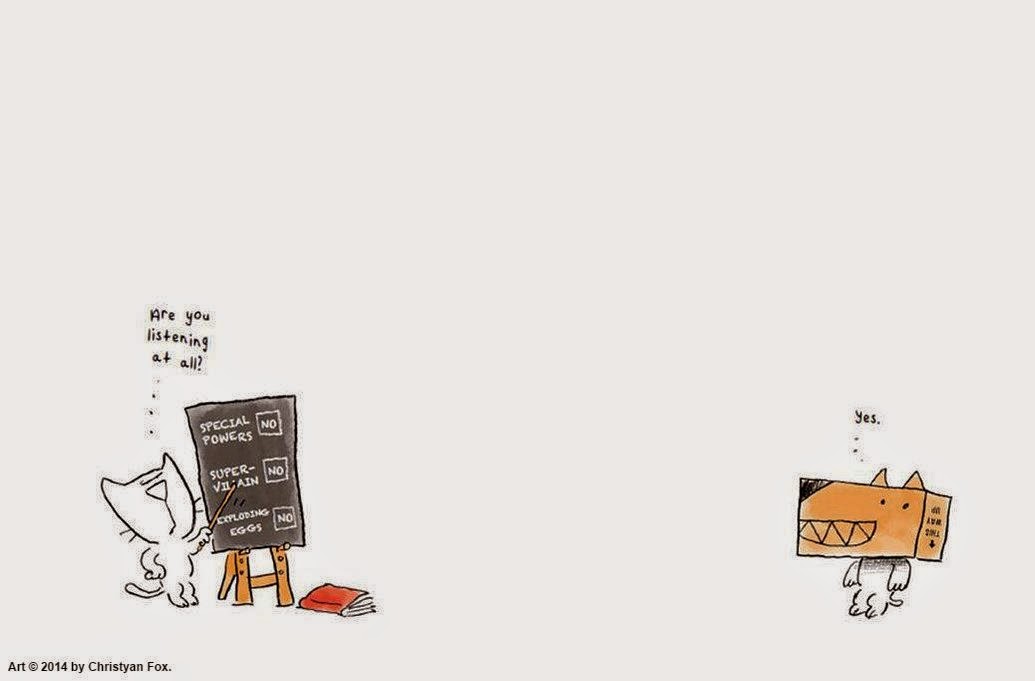 Posted by SurLaLune Fairy Tales at 9:24 AM No comments:

Black Heart, Ivory Bones by Ellen Datlow (Editor) and Terri Windling (Editor) is on sale in ebook format for $1.99. I didn't own this in ebook format yet (now I do!) so I don't believe it has been on sale before. I have a hard time justifying rebuys when I own a hardcover and paperback, but $1.99 always lets me except that frugal policy.

Once upon a time, all our cherished dreams began with the words once upon a time. This is the phrase that opened our favorite tales of princes and spells and magical adventures. World Fantasy Award–winning editors Ellen Datlow and Terri Windling understand the power of beloved stories—and in Black Heart, Ivory Bones, their sixth anthology of reimagined fairy tales, they have gathered together stories and poetry from some of the most acclaimed writers of our time, including Neil Gaiman, Tanith Lee, Charles de Lint, and Joyce Carol Oates. But be forewarned: These fairy tales are not for children.

A prideful Texas dancer is cursed by a pair of lustrous red boots . . . Goldilocks tells all about her brutal and wildly dysfunctional foster family, the Bears . . . An archaeologist in Victorian England is enchanted by a newly exhumed Sleeping Beauty . . . A prince of tabloid journalism is smitten by a trailer-park Rapunzel . . . A clockwork amusement park troll becomes sentient and sets out to foment an automaton revolution. These are but a few examples of the marvels that await within these pages—tales that range from the humorous to the sensuous to the haunting and horrifying, each one a treasure with a distinctly adult edge.

Color the Classics: Beauty and the Beast: A Deeply Romantic Coloring Book by Jae-Eun Lee

It's National Coloring Book Day, at least as declared by Dover Publications!

So I thought I would share Color the Classics: Beauty and the Beast: A Deeply Romantic Coloring Book by Jae-Eun Lee since I didn't do so when it was released in May. And since this is my favorite fairy tale, that is rather a shame that it took me so long. But it's been that kind of summer...

Anyway, here are some illustrations as well as pages showing the coloring pages index from the book. Awesome concept! Shows you that there are a lot of pages to illustrate. Click on images to see them larger. 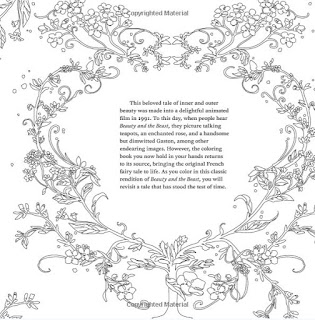 Color your way into the Beast's heart, in this visual retelling of the classic French fairy tale, Beauty and the Beast.

Join the pure-hearted Beauty as she offers herself to the fearsome Beast in exchange for her father's life, in a coloring book romance that features over seventy pages of evocative artwork, ready to be brought to life by your coloring skills and imagination. 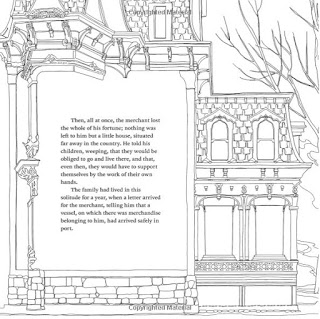 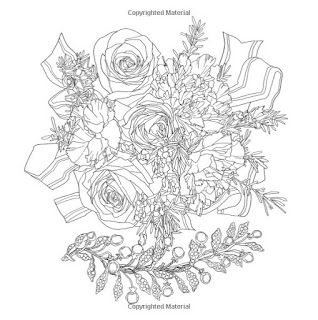 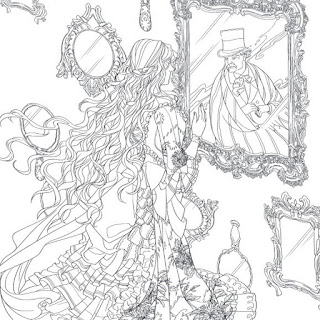 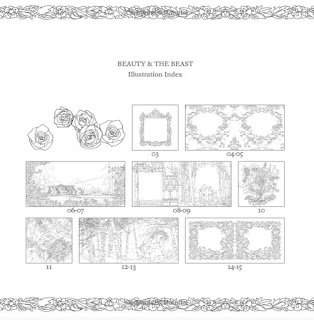 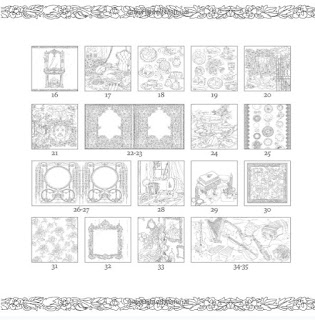 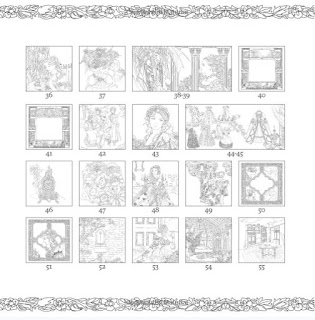 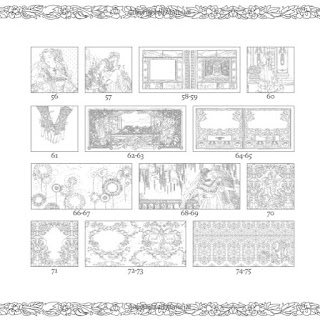