TODAY ONLY: Flunked (Fairy Tale Reform School) by Jen Calonita is on sale for $1.99 for the ebook edition.

Would you send a villain to do a hero's job?

Flunked is an exciting new twisted fairy tale from the award-winning author of the Secrets of My Hollywood Life series. "Charming fairy-tale fun." -Sarah Mlynowski, author of the New York Times bestselling Whatever After series.

Gilly wouldn't call herself wicked, exactly...but when you have five little brothers and sisters and live in a run-down boot, you have to get creative to make ends meet. Gilly's a pretty good thief (if she does say so herself).

Until she gets caught.

Gilly's sentenced to three months at Fairy Tale Reform School where all of the teachers are former (super-scary) villains like the Big Bad Wolf, the Evil Queen, and Cinderella's Wicked Stepmother. Harsh. But when she meets fellow students Jax and Kayla, she learns there's more to this school than its heroic mission. There's a battle brewing and Gilly has to wonder: can a villain really change?

Okay, I will admit I don't get overly excited about Red Riding Hood retellings unless something really unique is in them. This is a fun series, so that is a bonus, but what actually had me smiling at this book description is the inclusion of Goldie (you know, Goldilocks) as one of the main characters. I am now hoping she gets her own book next. Because Goldie and those bears don't get as many retellings and interpretations as they deserve. And I think that is because Goldie is a less likeable character, because she is thoughtless and destructive, but there is so much scope for the imagination for that which has yet to be explored.

Shurtliff is certainly exploring some of the non-princess characters that children are most familiar with and that thrills me no end. And readers agree judging from the star ratings of her books on book retailers.

"Red is the most wonder-filled fairy tale of them all!”—Chris Grabenstein, New York Times Bestselling author of Escape from Mr. Lemoncello's Library.

Red is not afraid of the big bad wolf. She’s not afraid of anything . . . except magic.
But when Red’s granny falls ill, it seems that only magic can save her, and fearless Red is forced to confront her one weakness.

With the help of a blond, porridge-sampling nuisance called Goldie, Red goes on a quest to cure Granny. Her journey takes her through dwarves’ caverns to a haunted well and a beast’s castle. All the while, Red and Goldie are followed by a wolf and a huntsman—two mortal enemies who seek the girls’ help to defeat each other. And one of them just might have the magical solution Red is looking for. . . .

Liesl Shurtliff weaves a spellbinding tale, shining the spotlight on a beloved character from her award-winning debut, Rump.

And don't miss Jack: The True Story of Jack and the Beanstalk, "a delightful story of family, perseverance and courage" (Booklist).

Posted by SurLaLune Fairy Tales at 8:31 AM No comments:

New Book: In Defense of the Princess: How Plastic Tiaras and Fairytale Dreams Can Inspire Smart, Strong Women by Jerramy Fine

In Defense of the Princess: How Plastic Tiaras and Fairytale Dreams Can Inspire Smart, Strong Women by Jerramy Fine was released in March. This is another entry in the long standing argument about princesses and princess culture, especially as fostered by Disney, and thus fairy tales are pulled into the fray.

It’s no secret that most girls, at some point, love all things princess: the poofy dresses, the plastic tiaras, the color pink. Even grown-up women can’t get enough of royal weddings and royal gossip. Yet critics claim the princess dream sets little girls up to be weak and submissive, and allows grown women to indulge in fantasies of rescue rather than hard work and self-reliance.

Enter Jerramy Fine – an unabashed feminist who is proud of her life-long princess obsession and more than happy to defend it. Through her amusing life story and in-depth research, Fine makes it clear that feminine doesn’t mean weak, pink doesn’t mean inferior, and girliness is not incompatible with ambition. From 9th century Cinderella to modern-day Frozen, from Princess Diana to Kate Middleton, from Wonder Woman to Princess Leia, Fine valiantly assures us that princesses have always been about power, not passivity. And those who love them can still be confident, intelligent women.

Provocative, insightful, but also witty and personal, In Defense of the Princess empowers girls, women, and parents to dream of happily ever after without any guilt or shame.


Here are two page shots to be read as an excerpt for your consideration, pages 33 & 34 of the book. You can click on these images to see them larger for reading or go to Amazon and look inside the book viewer to read them there. 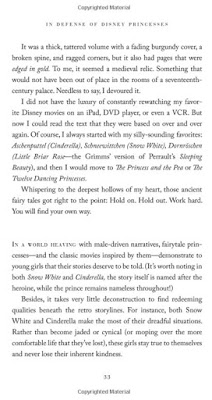 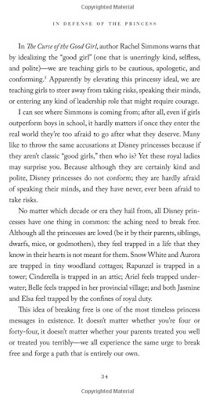 I haven't read the entire book but skimmed with some keyword searches of the text. The argument that the literary tales often offer strong women to be used as role models is one I think we overall agree with here in the SurLaLune fandom.

So here's book that uses studies/research and personal experiences to create an offering from a Princess culture apologist. Add it to your lists if this is one of your topics of interest!

New Book: The Door by the Staircase by Katherine Marsh

The Door by the Staircase by Katherine Marsh was released in January. Minor spoiler alert, this is a book that uses Russian folklore, primarily the Baba Yaga character, who has just exploded in retellings the past several years. It's aimed at preteens, but sounds like it would be fun for any age that enjoys a Baba Yaga appearance.

Twelve-year-old Mary Hayes can't stand her orphanage for another night. But when an attempted escape through the stove pipe doesn't go quite as well as she'd hoped, Mary fears she'll be stuck in the Buffalo Asylum for Young Ladies forever.

The very next day, a mysterious woman named Madame Z appears at the orphanage requesting to adopt Mary, and the matron's all too happy to get the girl off her hands. Soon, Mary is fed a hearty meal, dressed in a clean, new nightgown and shown to a soft bed with blankets piled high. She can hardly believe she isn't dreaming!

But when Mary begins to explore the strange nearby town with the help of her new friend, Jacob, she learns a terrifying secret about Madame Z's true identity. If Mary's not careful, her new home might just turn into a nightmare.


Posted by SurLaLune Fairy Tales at 10:11 AM No comments:

is officially released today on April Fool's Day. The first Far Out Fairy Tales were released individually back in February with the four titles listed below. Two more titles were released in early 2016. Now the first four tales--and another unknown fifth tale according to the cover, but not the description--are available in a compendium. These are fairy tales with some science fiction inspiration, too.

What do you get when classic fairy tales are twisted about, turned inside out, and reworked for the graphic novel format? Far Out Fairy Tales! Discover what Snow White would be like if she were raised by robots. Find out how Cinderella's story plays out when she walks the path of the ninja. Play along when three billy goats named Gruff get stuck inside a video game. Chase down the Big Bad Wolf with the help of a superpowered Red Riding Hood! Each fairy tale revision holds true to the spirit of the original while adding a modern twist to the classic tales we know and love. Experience fairy tales like never before in this innovative series of full-color comic books for kids!