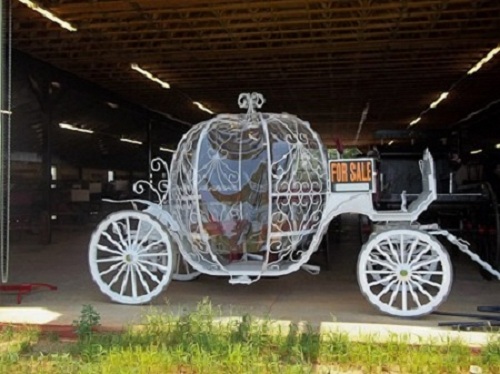 So I walked into the room the other night where John was falling asleep to some reality TV. The show happened to be Shipping Wars and one of the odd shipping items in this episode (Wheels of Misfortune) was one of the prettiest Cinderella carriages I have ever seen. Funny how that happens sometimes. I've watched two hours of TV this week (So You Think You Can Dance finale!) and an extra five minutes which happened to be this carriage by random chance. And as I saw them start to disassemble it, I refused to watch. 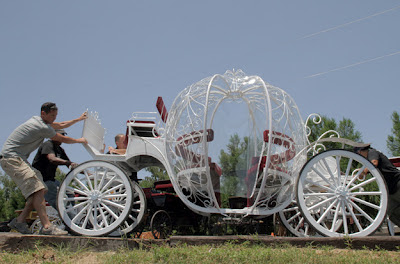 Let's face it. Cinderella carriages are practically a dime a dozen anymore. And, persnickety as I am, I never really cared to ride in one. The cheese factor is even higher than normal and despite my love of fairy tales, my dreams of living a princess fantasy have been pretty nonexistent most of my life. I didn't want to go through what fairy tales inflict upon them, I think. I always preferred to be a Charlie's Angel or a superhero as a kid and that instinct has stuck around. I was more thrilled with my oceanside carriage ride on Prince Edward Island--part of our travel package or I probably wouldn't have done it, silly me--back in 2008. That was more of a surrey so it had me thinking of Anne of Green Gables and Oklahoma!, not once of Cinderella. And, no, I am not an expert on carriage styles but I know a surrey from a phaeton. Usually.

But when this carriage was shown up close and personal in the show, I found myself wanting to ride in it. I didn't finish watching the episode but it lasted in my memory long enough to make me look it up the next morning. And then I went through several Cinderella carriages before I happened upon this one again. The seller has some amazing carriages but no more Cinderella ones, alas. I'm even more convinced this is one of the superior examples of its ilk. The carriage now resides in Kemah, Texas with a carriage ride company so I won't be riding in it anytime soon but I'll remember it for a while.

The picture doesn't do it justice but the $12,000 price tag may demonstrate it's expense and high level construction. All of that glass was pretty stunning and the wrought iron work was exquisite. 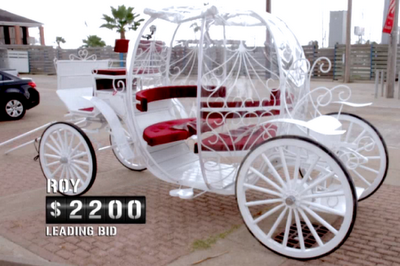 Posted by SurLaLune Fairy Tales at 9:07 AM