Bargain Ebook: Letters to Zell by Camille Griep TODAY ONLY for $1.99

by Camille Griep is on sale TODAY ONLY for $1.99 in ebook format.
Book description:

Everything is going according to story for CeCi (Cinderella), Bianca (Snow White), and Rory (Sleeping Beauty)—until the day that Zell (Rapunzel) decides to leave Grimmland and pursue her life. Now, Zell’s best friends are left to wonder whether their own passions are worth risking their predetermined “happily ever afters,” regardless of the consequences. CeCi wonders whether she should become a professional chef, sharp-tongued and quick-witted Bianca wants to escape an engagement to her platonic friend, and Rory will do anything to make her boorish husband love her. But as Bianca’s wedding approaches, can they escape their fates—and is there enough wine in all of the Realm to help them?

In this hilarious modern interpretation of the fairy-tale stories we all know and love, Letters to Zell explores what happens when women abandon the stories they didn’t write for themselves and go completely off script to follow their dreams.

Posted by SurLaLune Fairy Tales at 8:46 AM No comments:

Zero Repeat Forever (The Nahx Invasions) by G. S. Prendergast is released this week. The book description for this one references Beauty and the Beast, but some of the reviews imply that is fairly loose. It is the first in a series and this one ends on a cliffhanger, so be aware of that.

The 5th Wave meets Beauty and the Beast in this fast-paced and heart-stopping novel about an invasion of murderous creatures and one girl fighting for her life at the end of the world.

He has no voice or name, only a rank, Eighth. He doesn’t know the details of the mission, only the directives that hum in his mind.
Dart the humans. Leave them where they fall.
His job is to protect his Offside. Let her do the shooting.
Until a human kills her…

Sixteen-year-old Raven is at summer camp when the terrifying armored Nahx invade. Isolated in the wilderness, Raven and her fellow campers can only stay put. Await rescue. Raven doesn’t like feeling helpless, but what choice does she have?

Then a Nahx kills her boyfriend.

Thrown together in a violent, unfamiliar world, Eighth and Raven should feel only hate and fear. But when Raven is injured, and Eighth deserts his unit, their survival comes to depend on trusting each other…

Labels: Beauty and the Beast, books

The Mermaid by Jan Brett is officially released this week. Jan Brett has illustrated many favorite fairy tales. This one is an unusual twist, perhaps the most unusual from her to date. It's a Goldilocks story told with mermaids! Catnip for some people I know!

A striking under-the-sea version of Goldilocks as only Jan Brett could create.

When Kiniro, a young mermaid, comes upon a gorgeous house made of seashells and coral, she is so curious that she goes inside. She’s thrilled to find a just-right breakfast, pretty little chair, and, best of all, a comfy bed that rocks in the current.

But when the Octopus family returns home, they are not happy to find that someone has been eating their food and breaking their things. Baby has the biggest shock when she finds the mermaid asleep in her bed! Luckily, shock turns to happiness when Kiniro gives her a thoughtful gift before escaping from the twenty-four arms coming her way.

Vibrant, intricate scenes of an underwater paradise transport this classic fairy tale to a magical setting inspired by the seas off the coast of Okinawa, Japan. Chock full of fish and fauna and adventure, Kiniro’s story will enchant readers of all ages.


As always, here are some illustrations that you can view these larger by clicking on them. 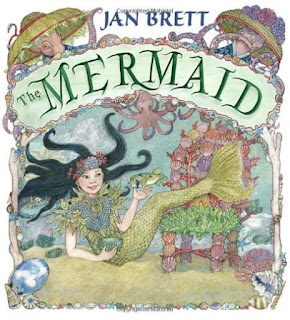 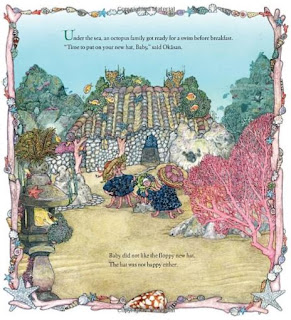 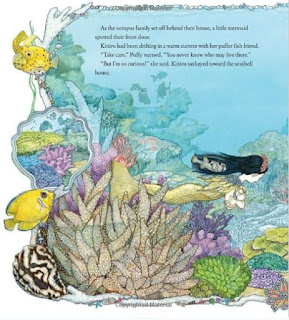 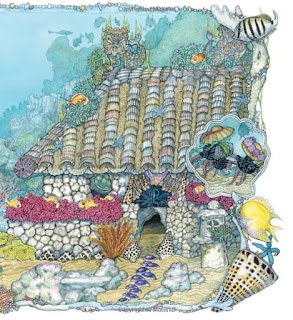 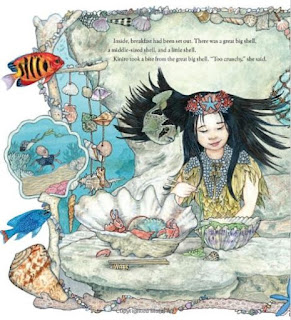 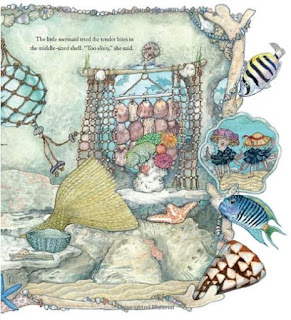 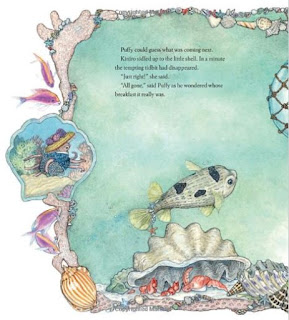 New Book: Wicked Like a Wildfire by Lana Popovic

Wicked Like a Wildfire by Lana Popovic is officially released today. According to some of the reviews, this one incorporates Balkan folklore, hence earning it's appearance here on the blog.

Fans of Holly Black and Leigh Bardugo will be bewitched by Lana Popovic's debut YA fantasy novel about a bargain that binds the fates—and hearts—of twin sisters to a force larger than life.

All the women in Iris and Malina’s family have the unique magical ability or “gleam” to manipulate beauty. Iris sees flowers as fractals and turns her kaleidoscope visions into glasswork, while Malina interprets moods as music. But their mother has strict rules to keep their gifts a secret, even in their secluded sea-side town. Iris and Malina are not allowed to share their magic with anyone, and above all, they are forbidden from falling in love.

But when their mother is mysteriously attacked, the sisters will have to unearth the truth behind the quiet lives their mother has built for them. They will discover a wicked curse that haunts their family line—but will they find that the very magic that bonds them together is destined to tear them apart forever?

Wicked Like a Wildfire is the first in a two-book series. Readers will be rapt with anticipation for the sequel.

Bargain Ebook: Beyond the Woods: Fairy Tales Retold by Paula Guran (Editor) for $1.99

Beyond the Woods: Fairy Tales Retold by Paula Guran (Editor) is on sale in ebook format for $1.99, the first time I have seen it bargain priced. If you don't have a copy of Tanith Lee's "Beauty" yet, this book is worth the price for that story alone. The rest are just bonus after that.

Once upon a time, the stories that came to be known as "fairy tales" were cultivated to entertain adults more than children; it was only later that they were tamed and pruned into less thorny versions intended for youngsters. But in truth, they have continued to prick the imaginations of readers at all ages. Over the years, authors have often borrowed bits and pieces from these stories, grafting them into their own writing, creating literature with both new meaning and age-old significance. In the last few decades or so, they've also intentionally retold and reinvented the tales in a variety of ways—delightful or dark, wistful or wicked, sweet or satirical—that forge new trails through the forests of fantastic fiction. This new anthology compiles some of the best modern fairy-tale retellings and reinventions from award-winning and bestselling authors, acclaimed storytellers, and exciting new talents, into an enchanting collection. Explore magical new realms by traveling with us, Beyond the Woods . . .

Bargain Ebook Anthology: Happily Ever After Edited by John Klima

by John Klima (Author, Editor), Bill Willingham (Introduction) is on sale in ebook format for $1.99. It was $9.99 before this drop to the sale price.

Most of the work in this collection is not original to the publication, only one short story and the introduction are brand new. However, the collection pulls from many anthologies--at least 16--and nice person that I am, I included many of the original sources in the table of contents below.

...in the faraway land of Story, a Hugo-winning Editor realized that no one had collected together the fairy tales of the age, and that doorstop-thick anthologies of modern fairy tales were sorely lacking...

And so the Editor ventured forth, wandering the land of Story from shore to shore, climbing massive mountains of books and delving deep into lush, literary forests, gathering together thirty-three of the best re-tellings of fairy tales he could find. Not just any fairy tales, mind you, but tantalizing tales from some of the biggest names in today's fantastic fiction, authors like Gregory Maguire, Susanna Clarke, Charles de Lint, Holly Black, Aletha Kontis, Kelly Link, Neil Gaiman, Patricia Briggs, Paul Di Filippo, Gregory Frost, and Nancy Kress. But these stories alone weren't enough to satisfy the Editor, so the Editor ventured further, into the dangerous cave of the fearsome Bill Willingham, and emerged intact with a magnificent introduction, to tie the collection together.

And the inhabitants of Story, from the Kings and Queens relaxing in their castles to the peasants toiling in the fields; from to the fey folk flitting about the forests to the trolls lurking under bridges and the giants in the hills, read the anthology, and enjoyed it. And they all lived...

Posted by SurLaLune Fairy Tales at 12:18 PM No comments:

Little Red Riding Sheep by Linda Ravin Lodding (Author) and Cale Atkinson (Illustrator) is released today. Page down to see some of the fun illustrations.

Arnold is an eager young sheep who is excited to be in his very first book. No problem-o! Except he’s a bit big and fluffy to play Little Red Riding Hood, and he’s a tiny bit scared of the deep dark woods. Oh, and he has a friend who would be just perfect as Granny…perhaps the author wouldn’t mind a few suggestions?

And book pages--you can click on these to view them larger: 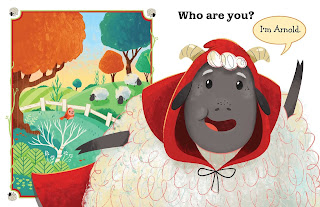 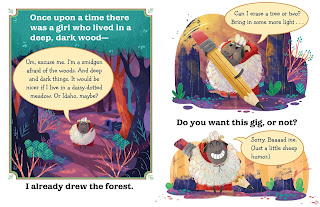 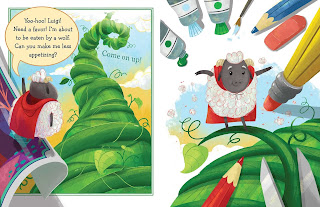 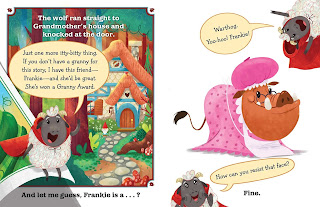 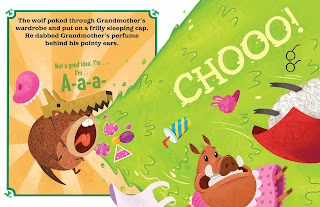 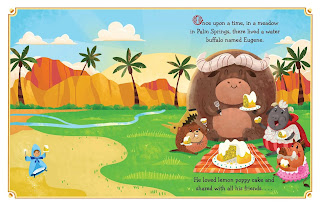 Beheld by Alex Flinn was released earlier this year. Flinn has written many fairy tale novels but this is a collection of four shorter stories within a framework. For me, the fun is especially an East of the Sun and West of the Moon retelling.

#1 New York Times bestselling author Alex Flinn is back with magical twists on four fairy-tale favorites, each featuring a little help from Kendra, the witch from Beastly, as she searches through cities and centuries for her lost love.

Featuring retellings of favorite fairy tales such as Little Red Riding Hood, Rumpelstiltskin, East of the Sun and West of the Moon, and The Ugly Duckling, Kendra’s adventures in Beheld are filled with fresh fairy-tale fun from beginning to end.

Since she first beheld James over three hundred years ago, Kendra has tangled with witch hunters and wolves, helped a miller’s daughter spin straw into gold, cowered in London as German bombs fell, and lived through who knows how many shipwrecks. But her powers have limits, and immortality can be lonely. Kendra isn’t ready to stop searching for the warlock she met centuries ago.

With the help of her magic mirror, Kendra will travel the world to reconnect with her lost love—and, of course, she can’t help but play a hand in a few more stories along the way.

Venturess by Betsy Cornwell is officially released this week. It is the second book in the Mechanica series, the first book of which was a Cinderella story about Nicolette, an inventor. This book continues her story.

The young inventor Nicolette Lampton is living her own fairy-tale happy ending. She's free of her horrible stepfamily, running a successful business, and is uninterested in marrying the handsome prince, Fin. Instead, she, Fin, and their friend Caro venture to the lush land of Faerie, where they seek to put an end to the bloody war their kingdom is waging. Mechanical armies and dark magic await them as they uncover devastating secrets about the past and fight for a real, lasting happily-ever-after for two troubled countries—and for themselves.

Smart and unconventional, this novel will appeal to readers of romance and adventure alike.