Playing at Princess and the Pea by Angie Duignan 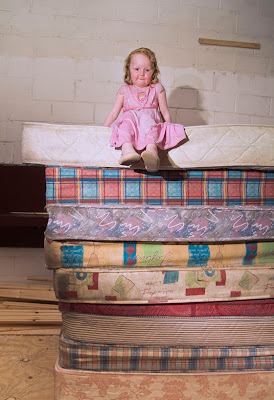 'How does that story go again?' © Angie Duignan
I discovered this photo as part of the The Imagination of Children exhibit at the V&A Children's Museum during 15 October 2011 - 5 February 2012 when I was exploring their exhibit listings a few weeks ago. The exhibit doesn't appear to have a fairy tale emphasis, but this photo just grabbed me, so I wanted to share.

Haven't you wanted to sit on a pile of mattresses or even sleep on one ever since you first heard the tale?

A small display throughout the Museum bringing together the work of nine visual artists - Sonia Boyce, Sarah Cole, Angie Duignan, Richard Elliott, Rebecca Fortnum, Róisín Loughrey, Martin Newth, Ans Nys and Jessica Voorsanger - each of whom are fascinated by the child's ability to play, pretend and live through their imagination.

Each inspired by a different aspect of the Museum's collections, the works produced include paintings, drawings, photographs and video installations.