I never wrote about this Fractured Fables (Hardcover),

first because I came to it late, second because I am not at all well-versed in current comic books,* and lastly because I didn't look past the cover when I saw it, which to me, hate me if you want, looked very generic, like cheap fairy tale books at the dollar store. Nothing wrong with that, but not my usual interest or what I assume to be yours. 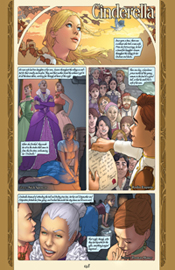 Then recently I stumbled across some sample pages from the book and I can fully admit I was wrong. I should know well enough by now to not judge a comic book by its cover, but at least I didn't suffer for my prejudgment forever. In other words, there is some great stuff within this innocuous looking cover. In fact, I learned that two of the pieces inside were nominated for Will Eisner Awards: Best Short Story Nominations--"Cinderella," by Nick Spencer and Rodin Esquejo & "Little Red Riding Hood," by Bryan Talbot and Camilla d'Errico. 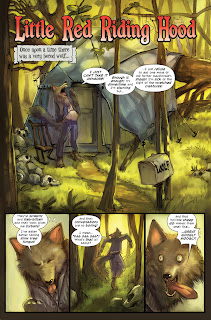 So like a diligent SurLaLune keeper, I have ordered my own hardcover copy to investigate further. It hadn't arrived when I wrote this, but I am not worried. I know I will like it. It's has enough pretty and I respond well to pretty. A paperback edition is due out in late January, so you can wait for that if you are interested. I wanted a hardcover myself. 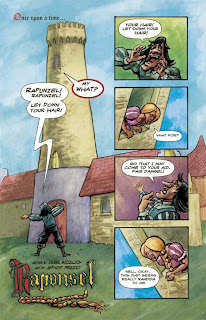 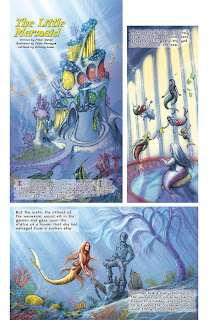 Here are just a few of my favorites:

■ "Little Red Riding Hood" is updated by writer Bryan Talbot and finds the brightly dressed child on a direct path to the Big Bad Wolf's stomach until she displays some surprising skills. Painter Camilla d'Errico brings a bit of an anime influence to the action and makes me exclaim when viewing Red, "My, what gigantic blue eyes you have."

■ Doug TenNapel's "Rumpelstiltskin" turns the classic into a "Ren and Stimpy" episode. He dementedly uses a grotesque art style that chaotically blends with the sophomoric hijinks of a magic little man who can turn hay into gold, a grumpy king and a dumber-than-a-post future queen.

■ The adventure of "The Little Mermaid" turns much more ominous in the hands of comics scribe extraordinaire Peter David as her quest to live happily ever after with a human prince becomes a puzzling problem in podiatry. Artist Ron Ferrara offers ample arch support for the mermaid's issues.

■ Writer Nick Spencer's "Cinderella" satisfies through a fable more about the frustrations of an unhip fairy godmother than the abused princess while artist Rodin Esquejo's beautiful and Disneyesque art style puts the story near the top of my favorites.


■ "Rip Van Winkle" meets Len Strazewski's imagination and we enjoy a story about a conceited girl named Pipi Van Wrinkles who gets loaded on cherry cordials and learns her fate as an adult. The slapstick shenanigans throughout come to life thanks to the pop-art and retro-Archie-Comics-like stylings of Paul Fricke. 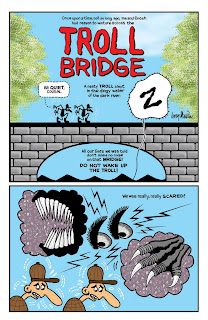 *Except for my few years of avid Superman collecting and reading in the mid 90s, so I am not completely ignorant of how the industry works. I had a large collection that was stolen when we moved to California although I had quit collecting at that point. But I gave up for good then. It was just too depressing. I was also raised around a brother who was a Marvel fan, so I've spent some time in comic book shops and it is my favorite set on Big Bang Theory. 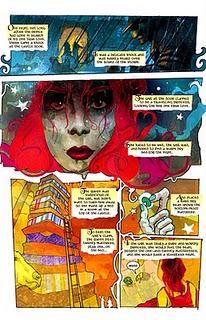