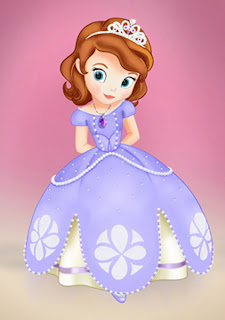 From For Disney, a Younger Princess By BROOKS BARNES at the New York Times:

This week the company plans to announce “Sofia the First,” a television movie and series centered on a girl princess. It’s a first: Disney’s princesses until now have all been adults (Cinderella, Snow White, Sleeping Beauty and so on).

“Sofia the First” will play on both Disney Channel and Disney Junior, a channel aimed at children ages 2 to 7 that is set to make its debut in the coming months. The company’s hope, of course, is for the character to spawn all kinds of consumer products. It’s a solid business bet; the Disney Princess toy line generates about $4 billion in annual retail sales.

From Disney unveils newest princess, Sophia the First, for toddlers: Hoping youngest belle of the ball will appeal to younger kids BY Sashana Maitland at NEW YORK DAILY NEWS:

Nancy Kanter, general manager for Disney Junior Worldwide, told Reuters that “Sophia the First” will feature "plenty of pretty dresses and sparkly shoes," but with an emphasis on "what makes a real princess is what's inside, not what's outside."

And from Disney Announces New Princess:

Sofia the First, will be an animated movie as well as a TV series that will focus of this oh-so-cute purple-gowned child princess. The tiny princess adventures begin with Sofia’s mom marries the king of their storybook world. The two new royals then pack up their old lives and move into the castle, where they start their fancy new fairytale lives. In addition to gaining a step brother and sister, Sofia will also have guest encounters with existing Disney Princesses like Cinderella and the pretty fairies from Sleeping Beauty!

So this time, a corporate construct not based on any specific character. What do you think?
Posted by SurLaLune Fairy Tales at 5:05 AM