Ever since we watched episode 5 of Grimm on NBC, "Danse Macabre," the music has been echoing through John's head. He has a strong knowledge of classical, mostly from tuba playing, but didn't know much about this one, so I went researching to see if his educated guesses were correct--he predicted the decade of composition and country of origin (although the name strongly hints at that one). Fun husband! It's a common roadtrip game with us--I can pick almost anything on my 80GB iPod and see how long it takes for him to identify it.

First of all, I already had two versions on my iTunes which lead us to reexploring a fascinating collection I have, Infernal Violins by Angele Dubeau & La Pieta

. Highly recommended and not at all December holiday spirited, but if you, too, have Danse Macabre haunting you, check this out. Yes, it's a collection of music inspired by the Devil. But it's not nearly as "evil" as that sounds, after all, most of these are folklore devils which tend to be much more sympathetic and the equivalent of "Death" than many religious outright evil ones. And the music is invigorating but not as dark as one would guess--not Wagnerian as one would assume, that is. Most of it is straight classical although there is a fun classical mash-up of Paint It Black and Sympathy for the Devil on it, too. 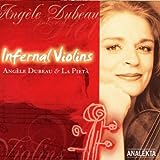 Anyway, courtesy of Wikipedia, some highlights about Danse Macabre, too:

Danse macabre, Op. 40, is a tone poem for orchestra, written in 1874 by French composer Camille Saint-Saëns. It started out in 1872 as an art song for voice and piano with a French text by the poet Henri Cazalis, which is based in an old French superstition. In 1874, the composer expanded and reworked the piece into a tone poem, replacing the vocal line with a solo violin.

According to legend, "Death" appears at midnight every year on Halloween. Death calls forth the dead from their graves to dance their dance of death for him while he plays his fiddle (here represented by a solo violin). His skeletons dance for him until the rooster crows at dawn, when they must return to their graves until the next year.

And the vocal lines, translated into English:

Zig, zig, zig, Death in cadence,
Striking a tomb with his heel,
Death at midnight plays a dance-tune,
Zig, zig, zag, on his violin.
The winter wind blows, and the night is dark;
Moans are heard in the linden trees.
White skeletons pass through the gloom,
Running and leaping in their shrouds.
Zig, zig, zig, each one is frisking,
You can hear the cracking of the bones of the dancers.
A lustful couple sits on the moss
So as to taste long lost delights.
Zig zig, zig, Death continues
The unending scraping on his instrument.
A veil has fallen! The dancer is naked.
Her partner grasps her amorously.
The lady, it's said, is a marchioness or baroness
And her green gallant, a poor cartwright.
Horror! Look how she gives herself to him,
Like the rustic was a baron.
Zig, zig, zig. What a saraband!
They all hold hands and dance in circles.
Zig, zig, zag. You can see in the crowd
The king dancing among the peasants.
But hist! All of a sudden, they leave the dance,
They push forward, they fly; the cock has crowed.
Oh what a beautiful night for the poor world!
Long live death and equality!

And, so, some Death inspired music for this December Monday! Thanks, Grimm!
Posted by SurLaLune Fairy Tales at 11:35 AM