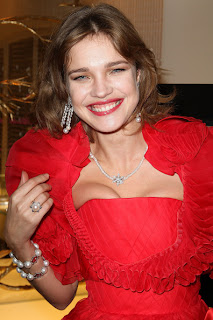 I shared Natalia Vodianova's previous fairy tale inspired work in my July 2011 post, The White Fairy Tale Love Ball 2011. Last week she had a party at the Guerlain Boutique in Paris to launch her new fairy tale jewelry line designed with De Beers. I can't find much on the jewelry beyond the press coverage of the actual event. (But in my searching I stumbled upon De Beers' Swan Lake Collection.) Anyway, Vodianova loves fairy tales and uses them to raise money for her Naked Heart charity which constructs playgrounds for children across Russia. She also always wears only red to her own events. Here are some images. I actually like the jewelry, most of it is understated and more to my taste. If I learn more, such as more about inspiration or piece names, I will share later!

The millionaire model is known for her “rags-to-riches”, fairytale story. Brought up in Nizhny Novgorod in a poor family with a disabled sister, Vodianova enrolled in a modeling academy at the age of 15 to become one of the world’s most successful supermodels.