New Release: The Castle Behind Thorns by Merrie Haskell 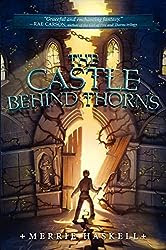 The Castle Behind Thorns

by Merrie Haskell is released this week. Haskell has previously explored other fairy tale tropes, especially Twelve Dancing Princesses in The Princess Curse

. This book is a very loose retelling of Sleeping Beauty, quite suitable for this week's release of Maleficent.

This book probably offers a fine counterpoint to the film.

This magical adventure in an enchanted castle surrounded by thorns tells a tale of the power of memory and story, forgiveness and strength, and the true gifts of craft and imagination. By the acclaimed author of The Princess Curse and Handbook for Dragon Slayers, this original fantasy is perfect for fans of Gail Carson Levine, Karen Cushman, and Shannon Hale.

When blacksmith apprentice Sand wakes up in a ruined castle, he has no idea how he got there, but the thorny brambles that surround the walls prevent him from leaving. As he begins to fix up the castle in order to survive, everything he touches somehow works better than it should. Then, as he continues to explore, Sand discovers the castle's secrets, including its long-lost heir, Perrotte. Together, they must fully repair the broken castle if they ever want to leave.