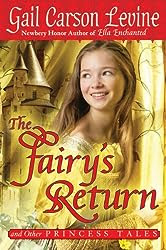 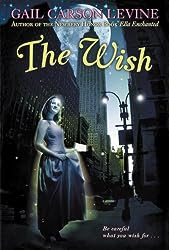 The Fairy's Return and Other Princess Tales

are not new books. They are actually two of Gail Carson Levine's earliest books, dating back from when Ella Enchanted (Trophy Newbery)

was released. I'm posting about them here because they have been released in ebook format for the first time and I have always been a fan of Levine's collection of Princess Tales that appear in The Fairy's Return since she plays with some lesser known tales in fun ways. They are short--short story length really--and were published individually back in the day for a higher price for each than this one volume costs with them all combined. How often do we see Princess and the Pea and Toads and Diamonds used for fairy tale retellings inspiration? Not much. Just see my lists on SurLaLune to understand how rare it is.

Book description for The Fairy's Return and Other Princess Tales

Ever since Newbery Honor author Gail Carson Levine introduced the magical village of Snettering-on-Snoakes in the faraway Kingdom of Biddle, young readers have been laughing their way through her hilarious retellings of famous and not-so-famous fairy tales.

Now, for the first time, the six beloved Princess Tales are together in one magnificent volume:

The high jinks begin in The Fairy's Mistake, which pokes fun at a meddlesome fairy whose plans for good go terribly awry. In The Princess Test, the author spoofs the notion that a pea can prove a person's pedigree. Princess Sonora and the Long Sleep features a genius of a princess, a hundred years of snooze, two princes, and a flock of balding sheep! Cinderella is a boy in Cinderellis and the Glass Hill, and the glass slipper is a glass hill. In For Biddle's Sake, Parsley tries to forget her beloved prince and get used to life as a Biddlebum Toad. The road to happily-ever-after isn't easy when a baker's son and a princess fall in love in The Fairy's Return.

Elements of the classics are woven into these not-so-typical retellings of "Toads and Diamonds," "The Princess and the Pea," "Sleeping Beauty," "The Princess on the Glass Hill," "Puddocky," and "The Golden Goose." The fresh and funny twists on favorite fairy tales will win the hearts and capture the imaginations of young readers everywhere.


Book description for The Wish

There's nothing wrong with Wilma Sturtz. She's perfectly nice. But nobody cares about nice at Claverford, her middle school. Wilma is left out, forgotten, ignored -- until she meets an extraordinary old lady who grants a wish: for Wilma to be the most popular kid in school. Presto! Everything changes. Now Wilma has more best friends than she can keep track of and forty dates to the Graduation Night Dance; and someone is writing her love poetry. What more could she want? Nothing! But will it last? How can Wilma make sure she is never unpopular again?

From Gail Carson Levine, author of the Newbery Honor book Ella Enchanted, this modern-day fairy tale shows a very real girl in a very unusual predicament, and along the way it reveals some painful truths about whether or not we really want to be liked for who we are.

Posted by SurLaLune Fairy Tales at 10:08 AM