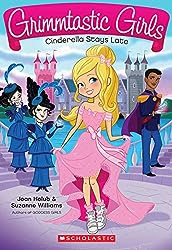 by Joan Holub and Suzanne Williams. The reader reviews are strong for these and this first book is already backordered in paper edition, but of course it's always available in ebook.

This series may become as popular or even surpass the Princess School series by Jane Mason and Sarah Hines Stephens. That one has been out of print for years now and I still get an occasional email about it, asking if it will be continued or reprinted. Alas, it was published before ebooks became de rigueur. So it remains regretfully out of print except for used copies. And I know nothing else about it.

The authors of the hit Goddess Girls series put a fun and girly twist on another super-popular theme: fairy tales!

Once upon a time, in faraway Grimmlandia...

A Grimmtastic girl named Cinderella is starting her first week at Grimm Academy on the wrong foot. Cinda's totally evil stepsisters are out to make her life miserable. The Steps tease Cinda, give her terrible advice about life at the academy, and even make her look bad in front of her new friends, Red, Snow, and Rapunzel! But when Cinda overhears the Steps plotting a villainous deed that could ruin Prince Awesome's ball, Cinda, her new friends, and a pair of magical glass slippers have to stop them--before the last stroke of midnight! 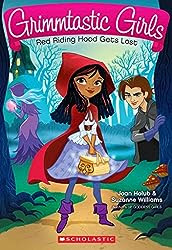 is already available and it is not backordered.

Red Riding Hood might have a terrible sense of direction, but her grimmtastic friends are always there to help!

Once upon a time, in faraway Grimmlandia...

Red Riding Hood is thrilled to try out for the school play. Acting is her dream, and she's great at it--too bad she has stage fright! After a grimmiserable audition, Red decides to focus on helping her friends Cinda, Snow, and Rapunzel save Grimm Academy from the E.V.I.L. Society. But when Red gets lost in Neverwood forest and runs into Wolfgang, who might be part of E.V.I.L., she needs her magic basket and a grimmazingly dramatic performance to figure out what's going on! 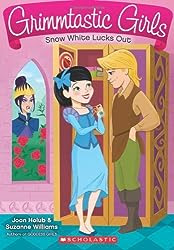 will be released on June 24th.

Once upon a time, in faraway Grimmlandia. . .

No matter how many lucky charms she wears, Snow White can't catch a break. She's especially worried that her stepmom, Ms. Wicked, is a member of the E.V.I.L. Society. Snow and her friends Red, Cinda, and Rapunzel are trying to stop E.V.I.L.'s plans to destroy Grimm Academy, but Snow seems to be jinxing all their efforts. Her luck might change if she can find her own truly magical charm -- before it falls into E.V.I.L. hands! 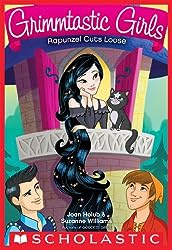 will be released in September.

Welcome to Grimm Academy, where Cinderella, Red Riding Hood, Snow White, and Rapunzel are BFFs -- and saving the world from the E.V.I.L. Society, one magical adventure at a time!

Once upon a time, in faraway Grimmlandia . . .

Rapunzel's magical fast-growing hair can be a nuisance, especially when an accident gives it magical powers she can't control! But Rapunzel can't let her grimmiserable hair woes distract her -- she and her friends, Cinda, Red, and Snow are trying to save Grimm Academy from the E.V.I.L. Society. Once Rapunzel tracks down her magic charm, she won't let a bad hair day get in the way of stopping E.V.I.L.!

Posted by SurLaLune Fairy Tales at 5:42 AM