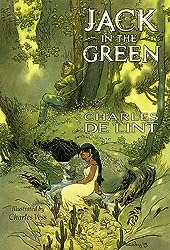 Jack in the Green

by Charles de Lint (Author), Charles Vess (Illustrator) was released late last month. This is a limited edition book so if you are interested, don't wait too long.

Robin Hood is not a fairy tale, but he is folklore and one of my personal favorites. This retelling sounds fascinating so I probably need to heed my own advice, yes? And with luscious illustrations by Charles Vess--I couldn't find any other samples from this book and I waited for a while to see if any would appear!--this will be a feast for many senses.

And if I read it, it will probably spark a Robin Hood rereading, I have so many favorites, some I've shared on the blog in the past.

Maria Martinez is a young maid, cleaning houses to get by, living in a neighborhood of Santo del Vado Viejo plagued by gang violence and drug cartels. When Maria witnesses her best friend from her teenage years breaking into a house in a gated community where she’s working, she has no problem pretending to the police she didn’t see a thing. But as Luz Chaidez comes back into Maria’s life, Maria can’t help remembering the magic Luz left to look for all those years ago. Magic she may have found. Maria is curiously drawn to one of Luz’s green-hooded gang of robbers, a handsome redheaded boy who calls himself Jack Green. Soon enough, she’s venturing into the dangerous territory of robbing from the rich to give to the poor…

In this deft, 22,000 word novella, acclaimed fantasist Charles de Lint brings one of the world’s most beloved tales into the modern day, transporting Robin Hood from the green wood to the barrio. Jack recasts an epic story of love and friendship, with justice at its center, in a way that readers won’t soon forget.