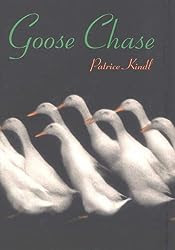 by Patrice Kindl has dropped to $1.99 in ebook format. It was $3.99 so it is now half price, probably for a limited time. I have owned this book since it was published in hardcover so I am thrilled that it is now at a price I can justify owning in digital format, too. I only wish Kindl's Owl in Love

was in ebook format at all. I read that one in grad school at a professor's recommendation and no, it hasn't left me despite the years since I read it. It's rather unique.

Goose Chase lightly borrows from Goose Girl, but it borrows from so much more than that, such as Rapunzel and Cinderella, and more which would be spoiling things. I've sent it to my niece, too, so we'll see what she thinks of it.

Her name is Alexandria Aurora Fortunato, and she is as lovely as the dawn. But that is only one of her problems. There’s also the matter of those three magical gifts of treasure bestowed on her by a mysterious old woman. And King Claudio the Cruel wants to marry her for her beauty and her wealth, and so does his rival, Prince Edmund of Dorloo. Those are two more problems. And, worst of all, she is locked in a tower, with a grille of iron bars and several hundred tons of stone between her and freedom. Some days Alexandria wishes she looked like a pickled onion. Clearly the only thing to do is escape—and, with the aid of her twelve darling goose companions, that’s precisely what Alexandria does.

So begins the adventure of Patrice Kindl’s beguiling heroine. Her flight will take her to strange lands and lead her into perilous situations, all of which the plucky Alexandria views with a wry and witty spirit. Here is a sprightly tale of magic and romance, in which those geese play a most surprising role.

Posted by SurLaLune Fairy Tales at 8:55 AM