Guest Post: Music Videos: "Call Me When You're Sober" & "Bring Me To Life" by Evanescence 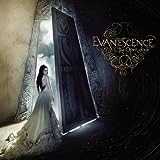 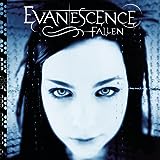 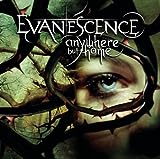 Once again, Gypsy from Once Upon a Blog has generously taken the time to write up a music themed post for the SurLaLune blog. Thank you, Gypsy! I'm sorry I am so absent this month...


Evanescence's Amy Lee played Red Riding Hood for the music video for "Call Me When You're Sober". Her Red wasn't so innocent, nor was she gullible. In fact, it appears she has quite a good grip on the lessons learned in the woods... 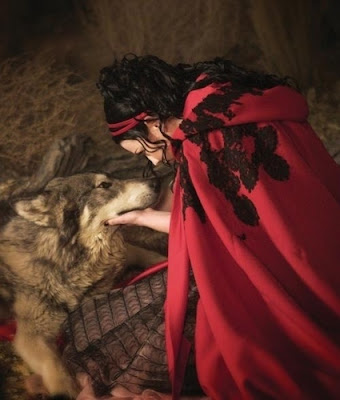 The accompanying music video directed by Marc Webb and filmed in Hollywood, Los Angeles was based on the fairy tale Little Red Riding Hood. It portrays Lee and her ex-lover, played by the British actor Oliver Goodwill. Segments of the band performing the song and Lee singing with wolves are also shown during the video.

The song has been marked by some as an indication of the band turning away from their personal self-destructive behavior at the time, though it's clearly centered around the break-up of the lead singer and her ex. I can't find any confirmation of this supposed 'turning point' beyond rumors and apart from it being a very big hit, particularly because of the Red Riding Hood imagery, I'm not sure it made a lasting impact on the band, though it makes for a nice way to editorialize the band's journey. :) The lyrics are very straight with no metaphors or allusions to Red Riding Hood at all but being so straight was apparently one of the reasons they wanted to play with imagery in the music video - to give it more resonance. It appears to have done the job very well (and made the band another hit).

A music video directed by Marc Webb[53] and filmed in Hollywood, Los Angeles in July,[54] was released on August 7, 2006.[53] The video and Amy Lee's theme is based on the fairy tale Little Red Riding Hood. During an interview with MTV News, Lee described the music video saying, "the song is so literal, the lyrics and everything — I mean, obviously, just by the title — that we felt like the video would have the freedom to go in a less literal direction. So it's [a modern re-imagining of] Little Red Riding Hood and the Big Bad Wolf and sort of a more cool, superhero, rock and roll Little Red Riding Hood."[55] According to an interview behind the scenes of the video, the director wanted Lee to straddle her "ex-lover" in the video, but Lee, opposed to selling sex, refused. Lee jokingly said, "You can't blame a guy for trying."[56] Each of the wolves used in the video had personal trainers. Despite Lee's allergy to the wolves in the video she "pet them and [sang] to them".[55][57] She further explained the shooting with the wolves:

"These live wolves came in, and they each had trainers and it was really fun.[...] I thought it was really cool, but then when they came in, they were 150 pounds. So I was like, 'Wow, if I got on all fours, I'd be about the same size as this huge animal.' But it was me and the wolves in the room, and it was all cool. It was awesome. My allergies kicked in, but I powered through. And then we shot the scene at the vanity with the Big Bad Wolf coming over my shoulders and trying to seduce me."[55] 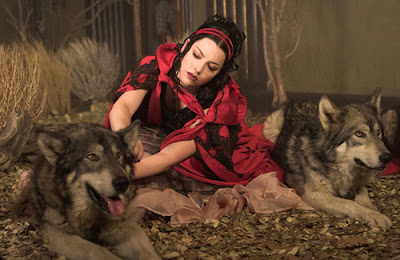 The video begins with Lee wearing a red satin cape, and singing while sitting on opposite ends of a dining table with her "lover", played by British actor Oliver Goodwill. Lee is then shown standing in front of a mirror while her "lover" comes behind her; he starts to massage her shoulders and prepares to kiss her, but Lee refuses, saying that he is "too late". This cuts to Lee and four back-up dancers descending a staircase, where upon reaching the bottom, first Lee then the dancers are lifted into the air. At the end of the song, Lee walks atop the length of the dining table, while chairs and tabletop items are flung aside as she passes. She reaches her "lover" at the end, places her finger on his lips, and sings "I've made up your mind". Shots of the band performing and of Lee sitting with wolves are interspersed amongst the other elements of the video.

Since we're on the subject of Evanescence, mention should be made of their arguably biggest hit, "Bring Me To Life". Although the music video is fairly straight forward with regard to sleeping and waking (and "not dying") metaphors, the music and lyrics have been heavily connected with fairy tales, particularly Sleeping Beauty and Snow White, though I've seen it connected to The Little Mermaid as well. It was also popular in Christian circles for a while, being seen as a cry for spiritual awakening, until Evanesence's record label finally stated that despite the "...spiritual underpinning that ignited interest and excitement in the Christian religious community," Evanescence are "...a secular band, and as such view their music as entertainment(source) The song was pulled from many Christian playlists directly after this statement but the metaphor was (and is) such a strong one it's stuck with the public at large, resulting in many fan-made remix videos at the time, showing fantasy imagery and allusions to a gritty yet fairy tale-like awakening.


You can see a recent fan-made image-mix video HERE which uses "Bring Me To Life" as Snow White's theme and centers mainly on the soon-to-be-released movie Snow White and the Huntsman. I sort of wish they'd continued in their creativity and included more variety  as they did at the start of the clip but I agree - it does fit well as a theme for her.

On a slightly different and more classical tack, here's a remix of Disney's Sleeping Beauty - told entirely in clips and via use of Evanescence's song. It not only keeps the story intact but fits very well:

By the way, this is the image of the official live CD/DVD released which includes two performance of "Bring Me To Life" (one is an "easter egg"). Nicely reminiscent of Sleeping Beauty, don't you think? 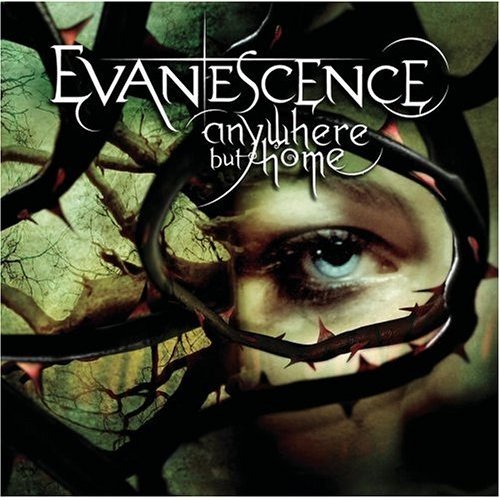 Posted by SurLaLune Fairy Tales at 5:02 AM