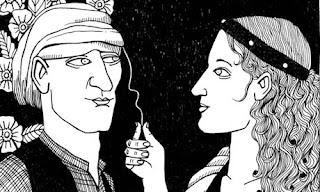 From Five hundred new fairytales discovered in Germany: Collection of fairytales gathered by historian Franz Xaver von Schönwerth had been locked away in an archive in Regensburg for over 150 years by Victoria Sussens-Messerer:

A whole new world of magic animals, brave young princes and evil witches has come to light with the discovery of 500 new fairytales, which were locked away in an archive in Regensburg, Germany for over 150 years. The tales are part of a collection of myths, legends and fairytales, gathered by the local historian Franz Xaver von Schönwerth (1810–1886) in the Bavarian region of Oberpfalz at about the same time as the Grimm brothers were collecting the fairytales that have since charmed adults and children around the world.

Last year, the Oberpfalz cultural curator Erika Eichenseer published a selection of fairytales from Von Schönwerth's collection, calling the book Prinz Roßzwifl. This is local dialect for "scarab beetle". The scarab, also known as the "dung beetle", buries its most valuable possession, its eggs, in dung, which it then rolls into a ball using its back legs. Eichenseer sees this as symbolic for fairytales, which she says hold the most valuable treasure known to man: ancient knowledge and wisdom to do with human development, testing our limits and salvation.

Von Schönwerth spent decades asking country folk, labourers and servants about local habits, traditions, customs and history, and putting down on paper what had only been passed on by word of mouth. In 1885, Jacob Grimm said this about him: "Nowhere in the whole of Germany is anyone collecting [folklore] so accurately, thoroughly and with such a sensitive ear." Grimm went so far as to tell King Maximilian II of Bavaria that the only person who could replace him in his and his brother's work was Von Schönwerth.

Von Schönwerth compiled his research into a book called Aus der Oberpfalz – Sitten und Sagen, which came out in three volumes in 1857, 1858 and 1859. The book never gained prominence and faded into obscurity.

You can read the rest at The Guardian's site. You can also read one of the tales, The Turnip Princess.

So, not really lost, just forgotten which is somewhat different. They were published in German and they are around, just not highlighted. As a researcher, not a member of the media proper, I distinguish. After all, Aus der Oberpfalz: sitten und sagen, Volume 1 By Franz Xaver von Schönwerth is available online at Google Books in full text. The other two volumes were not fully scanned but there may be ones soon. Of course, a full English translation of all three volumes would be wonderful. (Someone get right on that for me, okay?)

And don't think I am not happy about this news item if I sound less enthusiastic about the idea of lost treasures. These do deserve some much needed attention, no doubt, especially if they were much less edited than the Grimms. (I am unversed about Von Schönwerth's work overall, so don't know at this point.) I am thrilled whenever fairy tales get coverage in the media, except when I weary of the "don't read fairy tales to children" articles. I could muster through life with less of those....
Posted by SurLaLune Fairy Tales at 12:30 PM