Film: Tales Of The Night by Michel Ocelot 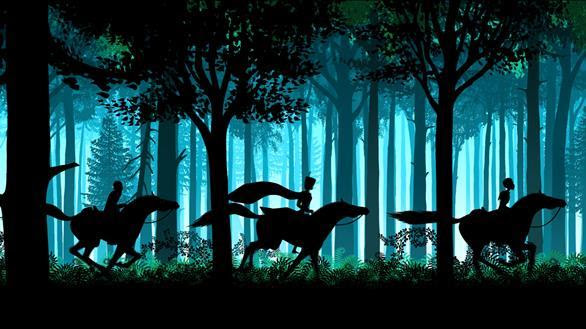 Tales of the Night (Les Contes de la Nuit) by Michel Ocelot just premiered at the Berlin Film Festival. From Tales Of The Night by Mike Goodridge:

In Tales Of The Night, French animation master Michael Ocelot returns to the same format as his 2000 film Princes And Princesses

(Princes Et Princesses), itself a compilation of short fairy tales in silhouette from his short-lived 1989 TV series Cine Si. The six new short stories possess plenty of the charm, wit and visual boldness for which his films are celebrated, but only newcomers to Ocelot’s work will be filled with wonder. For aficionados, there is very little fresh here and even some of the tales feel like rehashes of his previous work.

Ocelot’s fame should make the film a success in France when it opens in July and international sales will be strong, especially to buyers who took Azur Et Asmar (2006) or the Kirikou films; Ocelot’s DVD and TV value is timeless, and easily suited to redubbing in local languages.

In an age of multiple thousand screen releases for Pixar and DreamWorks titles, however these classical Tales are bound to find a niche in the specialised arena. The portmanteau nature of the concept and the silhouetted characters will hamper the chances of a wide acceptance among kids used to the digestible longform and easy visuals of Toy Story 3 and Tangled.

The film is presented in 3D, although for a film told with silhouettes, the device doesn’t add much visual enhancement. The imagery and colours are ravishing enough, and a 2D version is also available.

The article goes on to describe the tales in greater detail. Ocelot credits Lotte Reiniger as his greatest influence. You can read a review from the festival at Berlin 2011 Review: LES CONTES DE LA NUIT (Tales of the Night) by Robert Beames.

Here are some of his previous films.

Posted by SurLaLune Fairy Tales at 4:58 AM