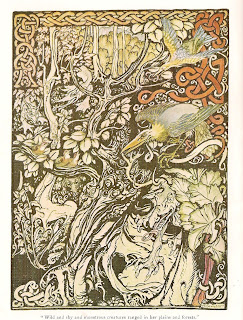 Alas, most good things must come to an end and a week ago Katherine posted the final Fairytale Reflections, ending fittingly enough with her own: Fairytale Reflections (21) Katherine Langrish. For now, she is going to be changing the focus of SMoST to a book tour and other activities, such as promoting her new book, West of the Moon (it's officially released only in the UK so far, so here's the link).

Fairytale Reflections has been a wonderful series and I am sad to see it end for now. Katherine and all the contributing authors were generous with their time and thoughts.

In her fairy tale reflection contribution to the post, Langrish shares the following:

Now here is a coda, or ending, to Fairytale Reflections. And there seemed no better story to write about than the very one which lent me the name for ‘Seven Miles of Steel Thistles’. As I used to say in a paragraph somewhere on the blog (which I removed because I figured by now you’d probably all seen it), the phrase comes from an Irish fairytale called -

THE KING WHO HAD TWELVE SONS

It’s hardly a well known story. I found it because of my habit of picking up shabby-looking books in second hand bookshops: a lovely old book called ‘West Irish Folk-Tales and Romances’ collected and translated by William Larminie (‘with introduction and notes, and appendix containing specimens of the Gaelic originals phonetically spelt.’) It was published by the Camden Library in 1893.

As always, much more to click through and read so do so!
Also, be aware that Katherine posted a short follow-up to this post, Fairytale Reflections - The Djachwi revealed... that will add a little what she discussed in the original post.

Posted by SurLaLune Fairy Tales at 8:55 AM