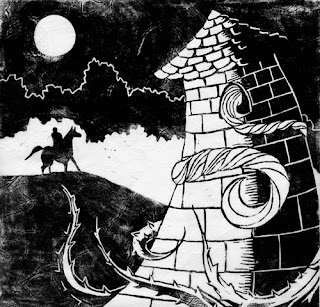 More of your Rapunzel Love and Hate thoughts. Here's part IV. by Luciana.


Regarding Rapunzel, I like to imagine it a little different from the earlier versions. I like to give fairy tale characters other perspectives in their own story. This is a version I made for Rapunzel ( I love the tale), and there are other fairy tale based poems at the Wooden Box blog, in case you´re interested. As the blog name says, I keep it as a repository of these poems I make sometimes.


The Girl in the Tower
A flap of wings.
An open window.
A beautiful creature inside, waiting for the black bird, ready to go.


They have been flying together for a long time now.
Appreciating each other´s company and talking about things of their different worlds.
The witch is always cursing the princes who climb the girl´s prison. She never sees the only one who flies in.


One day he alighted on her windowsill and she invited him inside.
And that´s how the Raven-Prince met The Lady of the Tower.


Funny the way things are.
People only see what they want to.


A young woman locked in a tower.
A witch who thinks she owns the girl.
She breaks the girl´s heart, she even cuts her braids.


But she´ll never, ever, suspect Rapunzel has a hidden pair of wings.

by Luciana
Posted by SurLaLune Fairy Tales at 12:00 PM