I. Rapunzel Love and Hate by J.L.M. 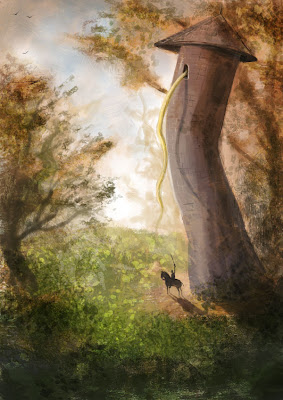 It's finally here.  Today I will be sharing your Rapunzel Love and Hate thoughts, one scheduled to post each hour starting at 9 AM CST.  I received 8 entries overall and had three randomly picked by Random.org to choose who would receive the three copies of Rapunzel and Other Maiden in the Tower Tales From Around the World. The numbers were 2, 5 and 7 (II, V, & VII). So stay tuned today to see who submitted those entries. I'll also be emailing the winners to request mailing addresses.  For the other five entrants, you will receive double entries in the contest coming up at the end of the month to celebrate SurLaLune's 12th anniversary.
Now here's part I. by J.L.M.

My earliest memory of Rapunzel is from Faerie Tale Theatre

. My cousin Lesley and I watched it on Laserdisc (we also had this two-sides Laserdisc copy of Jim Henson's Hey Cinderella and the Frog Prince; you could flip the laserdisc and watch one or the other). This was in the early to mid 1980s I believe.

I remember them describing different ways Rapunzel's mother would eat the radishes stolen from the witch's garden, but the only specific thing I remember was something like, "she ate them with chocolate fondue." Lesley and I had no idea what that was, but it must have caught both our imaginations, because the next time we made mud pies we called it "chocolate fondue."


Later, in elementary school, I checked out a picture book adaptation of Rapunzel. It was very ornately illustrated. I remember the prince being blinded by thorns when the witch tricked him into climbing the tower then let him fall. I must have been in about 4th grade, but I felt truly moved when he somehow found Rapunzel and their children after years of wandering through a desert. Rapzunel's tears brought back his sight. Something about that final scene in the book made an impression on me. Maybe because of the prince's long journey to find someone he already knew and loved....as opposed to the Disney movies where everyone was just in love automatically, and finding the princess was never a years-long search.


I guess what moved me even at that young age was the sincerity of that particular telling of the story; the prince's devotion, the transformative power of Love (tears of joy wiping away the witch's curse of blindness) in that desert.