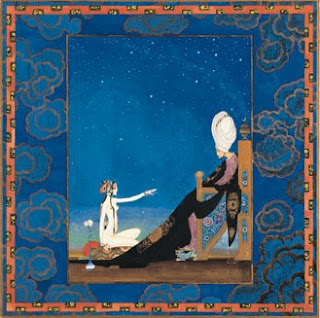 Dickinson chose to write about The Arabian Nights for his personal reflections.  I especially enjoyed his thoughts on Scheherazade, my favorite character from the tales. Here's an excerpt to whet your appetite.  As always follow the link to read more about Dickinson's own work as well as the full piece:

And Scheherazade herself. The young woman who, night after night, tells the stories to her husband the Caliph, knowing that if she ever loses his interest she will be executed in the morning like all his other wives before her. In the sweltering darkness she whispers to him, and he listens with his head propped on silken pillows as she ends one tale and begins another, only to fall silent just as her royal murderer is begging for more. Young as she is, she has mastered the art of the cliffhanger.

(I never asked myself, when I had that yellow book in my hands, what else she might have known about amusing men in bed. Nor did I wonder if the Caliph’s problem with women might have stemmed from some very private little problem of his own, and the reason the stories worked for him was because nothing else was going to. Sad creature that I am, I can think these things now. )

A thousand stories! I’m a storyteller myself, and used to being asked about my ideas. But where did she get all hers from? Maybe she walked at dawn through in the peacock gardens, her brain dull from fear and lack of sleep, plotting the twists and turns that would keep her alive for one night more. That story about the sailor went well. It must be worth a sequel or two. Is seven pushing it too far? All right, but what’s he going to do on his seven voyages? (Bird flies by with mouse dead in its claws) That’s it! Birds! Big birds, big enough to feed on elephants! That’ll make him sit up. That will get me one more dawn like this. One more…

And covers of some of John Dickinson's books, too.  I keep wanting to use his full name since he is Peter Dickinson's

son and I don't want confusion to develop:

Posted by SurLaLune Fairy Tales at 5:05 AM