III. Rapunzel Love and Hate by Rachel A. 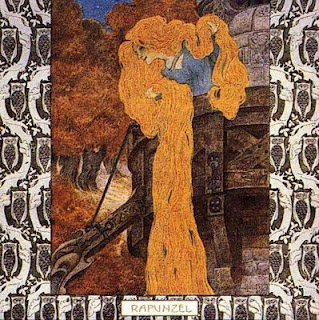 More of your Rapunzel Love and Hate thoughts. Here's part III. by Rachel A.


As a child, I was never a huge fan of Rapunzel. The story was so problematic--a woman who craves greens to the point where she tells her husband she'll die without them? (But then, I've never been pregnant...) A father who offers up his first child to a witch, seemingly without a qualm? A witch who becomes a loving mother, yet leaves her daughter locked in a tower out of fear? Etc.... I was intrigued by the story, but couldn't overcome my distaste for the washed-out picture-book versions where the young woman simply waits in a tower for a prince to rescue her.


Then I got a book of REAL fairy tales--no cleaned up contents, no bowdlerization--and suddenly Rapunzel was a whole different story! Sure, it included some of the same problems, but that was only HALF the tale! Imagine my surprise to discover that after Rapunzel should be rescued and home-free, she's actually sent to live alone in the desert, where she bears twins and survives with them for years... and her prince is blinded and wandering for those years... and only after this trial do they come together.

Once I took a deeper look at the story, I came to appreciate it more. It's one of the few stories where the hero and heroine aren't madly in love at first sight--sure, they like each other, but the prince comes and hangs out with Rapunzel every day. They get a chance to get to know each other. They get to have a REAL relationship--which is then set upon with problems, which are then overcome (admittedly through some luck, but also through patience and endurance).


Now, of course, there are wonderful retellings, such as Shannon and Dean Hale's Rapunzel's Revenge

, as other writers have discovered the deepness and intricacy buried in the simple telling of the original tale. Now it's one of my favorite stories.