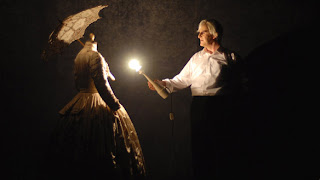 From The Andersen Project: This is not a fairytale by Richard Ouzounian:


You just know that when Robert Lepage sets out to put the story of Hans Christian Andersen on the stage, it’s not exactly going to be The Little Mermaid.

Lepage’s gift for finding the darkness inside any story has never been more manifest that it is in The Andersen Project, which Canadian Stage presents....
Andersen is practically canonized in his native Denmark for his bittersweet fairytales like The Little Match Girl and The Ugly Duckling, and most North Americans think of him in terms of the sticky sweet portrait that Danny Kaye delivered in the 1952 film Hans Christian Andersen

But the real man was considerably more complex, living a life of sexual frustration in which he longed for women who would not have him and men who could not oblige him, ultimately turning to self-satisfaction for his release.

All of this is fascinating enough on its own, but Lepage just had to add an extra level of complication. So his story is told through the eyes of a Quebecois songwriter who has been commissioned to write an opera based on one of Andersen’s stories. During his preparation, he runs into a bizarre assortment of characters, mirroring the various twists and turns in Andersen’s life.

Lepage originally performed the work himself, but as it proved to have incredible appeal (it’s been presented in 10 countries so far), he needed to pass the acting reins on to someone else.

Sounds fascinating and certainly not like Danny Kaye's version