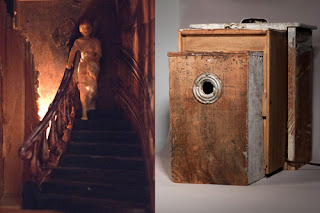 This timely piece arrived in my inbox from Ellen Kushner just as the *&*%$ I've been bedridden with hit me over the weekend.  Then Lisa Stock just poked me with it again rescuing it from my temporary amnesia.  Thanks to both of them.  So late, but not too late, I hope:

LZ Project Space is pleased to present Rated: Grimm, sculptures by Tine Kindermann. For her first solo exhibition, Kindermann shows her series of dioramas and peephole installations inspired by the Brothers Grimm's dark fairy tales. Juxtaposing kitsch and horror, childhood imagery and childhood fears, tiny murders in the dollhouse, Kindermann’s work reflects her upbringing in West Germany, where traditionally, traveling storytellers would capture their audiences in the marketplace with “Guckkästen”, peep hole installations that promised a glimpse into faraway lands, long before printed media or moving images were invented.

Since 1997, Kindermann’s peephole boxes have seduced her viewers with their promise of a small perfect world, but then delivered unexpected horrors: a cut off head, the dangerous woods of German fairy tales, a family facing an uncertain (or worse, certain) fate, or a roof destroyed by an earthquake or bombing. Made from drawers and crates found in the streets of New York's Lower East Side, and peopled with sculpted figurines, these miniature worlds invite the viewer to participate as a voyeur in a story told without words, in which the dollhouse format often belies the severity of what appears to have happened. "The maiden fetched the magic wand, and she took the dead girl's head and dropped three drops of blood on the ground, one in front of the bed, one in the kitchen, and one on the stairs." (From "The Darling Roland") Drawn to stories and folk songs in which the hero or heroine experiences an event which turns their life around, Kindermann depicts the moment before the climax and describes it as “a terrible stillness, time stopping for a heartbeat. These moments, and the feelings associated with their implied consequences, are what I try to capture in images.”

You can see some images and read more here and here. The same information at both links, the latter probably more permanent than the former which didn't work for me at first but then loaded.

Thanks Ellen and Lisa...
Posted by SurLaLune Fairy Tales at 5:40 PM