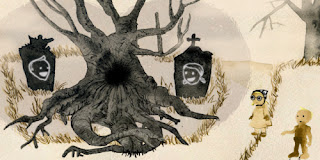 Here's an article about a new computer game based on Hansel and Gretel as well as a link to the game.  I tried playing it for a few minutes and got stuck.  I don't have a gamer's brain.  But it is interesting to look at so take a peep if you are interested but not a gamer either.

From Death Is a Strange Reward: The 'Gretel and Hansel' Series by G. Christopher Williams:

Most modern versions of fairy tales also revise the more “questionable” elements of such stories, but David Bae and Nathan Ratcliffe’s Gretel and Hansel series returns to the uglier truths of a violent world that is unforgiving of the inexperienced and immature. Interestingly, the reversal of the protagonist’s names in the title, which signals the developers’ decision to make Gretel the clearly dominant hero in the story, seems to especially beg comparison to Perrault’s type of tale. It is the female character that is most at risk throughout the games, since that is the character that the player largely controls, making one wonder if there is a similar lesson intended, something about the fragility of children with younger women being made especially vulnerable here.


These games are clearly designed to be unsettling though. Their aesthetics make this notion abundantly clear from their opening cinematics to the beautifully rendered, but grotesque cartoon imagery to the remarkably strange score of the game. In the opening sequence and tutorial of Part 2, for example, the player learns how to move Gretel around and interact with items by yanking up what appears to be a weed growing against a stark background. Instead, it is the head of her brother Hansel that emerges from the ground, as does the head of another older man across the screen. When Gretel yanks on the man’s head, a tree erupts from the ground, splitting the man’s head open. Another tree quickly follows, destroying Hansel’s head. In a cinematic, Gretel flees the violence, but as she disappears from the screen, her shadow lengthens, and the player sees that another shadow now looms over Gretel. The shadow appears to be that of an adult woman, but a woman bearing an axe. The opening cinema demonstrates the nature of the world of Gretel and Hansel. It is terrifying and violent and flight to figures that might seem to offer safety, like an adult, holds no real promise of security.

The game itself is available for playing at Gretel and Hansel by makopudding.
Posted by SurLaLune Fairy Tales at 2:20 PM