Tuhka-Triinu: A Cinderella Tale from Estonia 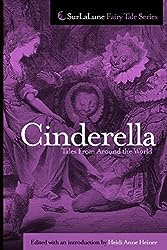 ONCE upon a time there lived a rich man with his wife and an only daughter. When the mother dies, she directs her daughter to plant a tree on her grave, where the birds can find food and shelter. The father marries a widow with two daughters, who ill-treat the motherless girl, declaring that she shall be their slave-girl. A magpie cries from the summit of the tree, “Poor child, poor child! why do you not go and complain to the rowan-tree? Ask for counsel, when your hard life will be lightened.”

She goes to the grave at night, and a voice asks her to whom she should appeal, and in whom she should trust, and she answers, “God.” Then the voice tells her to call the cock and hen to help her, when she has work to do which she cannot perform by herself.

When the king’s ball is announced, Cinderella has to dress her sisters, after which the eldest throws lentils into the ashes, telling her to pick them up; but this is done by the cock and hen. She is left at home weeping, and a voice tells her to go and shake the rowan-tree. When she had done so, a light appeared in the darkness, and she saw a woman sitting on the summit of the tree. She was an ell high, and clothed in golden raiment, and she held a small basket and a gold wand in her hands. She took a hen’s egg from her basket, which she turned into a coach; six mice formed the horses, a black beetle formed the coachman, and two speckled butterflies the footmen.

The little witch-maiden then dressed Tuhka-Triinu as magnificently as a Saxon lady. She then sent her to the ball, warning her to leave before the cock crows for the third time, as everything will then resume its original shape. On the second night Tuhka-Triinu took to flight, and lost one of her little gold shoes, which the prince found next morning. When it came to be tried on, Tuhka-Triinu’s sisters, who thought they had small feet, tugged and squeezed without success. But the shoe fitted Tuhka-Triinu. Her guardian again robed her magnificently, and she married the prince.

Source: Kirby, William Forsell, editor. The Hero of Esthonia and Other Studies in the Romantic Literature of that Country, Volume 2. London: John C. Nimmo, 1895.
Posted by SurLaLune Fairy Tales at 8:43 AM

Labels: Cinderella, Cinderella Tales From Around the World, tales