New Release: The Lady Meets Her Match by Gina Conkle 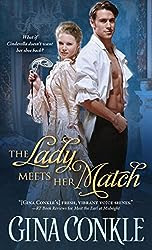 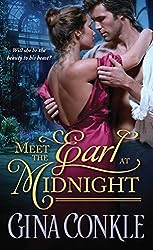 by Gina Conkle was released this week. It's the second in Conkle's fairy tale romance series that began with last year's release of Meet the Earl at Midnight (Midnight Meetings)

. I don't devote much blog space to romance novels since they are harder to track and I find of overall lesser interest to readers here, but when I see a series, I try to share here. I'm always fascinated by the ways any fairy tale is reinterpreted in almost any genre. The new book is a Cinderella retelling while the first, Meet the Earl at Midnight (Midnight Meetings)

, is a Beauty and the Beast retelling.

Book description for The Lady Meets Her Match (Midnight Meetings)

LOCATING HER IS ONLY HALF THE BATTLE

Cyrus Ryland didn't become England's wealthiest bachelor by being a pushover, but the mysterious beauty he discovers sneaking around at his grand ball enflames his curiosity. When the clock chimes midnight and she's nowhere to be found, Cyrus vows to scour all of London to uncover who she is. Little does he know that not only does Claire Mayhew not want to be found, but she wants nothing to do with him at all...

Book description for Meet the Earl at Midnight (Midnight Meetings)

It's going to take a Beast to tame this Beauty

The Enigma Earl. The Lord Phantom. That's what the gossip pages call Lord Greenwich, a mysterious nobleman who doesn't show his face in London Society. With a reputation like that, it's no wonder that Lydia Montgomery is horrified to be dragged from bed and packed off to live with him to save her mother from penury.

While Lydia has received all of the training a lady should endure, she's decidedly un-ladylike. She despises her corset and isn't interested in marriage; in fact, she would prefer to remain unmarried so that she can spend her time improving her art. But if she wants a chance at happiness, she'll have to set aside her fear of Lord Greenwich and discover the man hiding behind the beast.

Posted by SurLaLune Fairy Tales at 7:46 AM