There is currently a Females Leads Comics Omnibuses Sale

at Amazon with several first titles that are usually in the $12 and up range on sale for $2.99 in ebook format. Two of the titles are from the Fables Universe and I am sharing below: 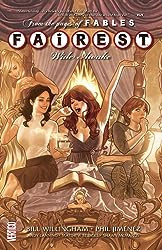 The first 6-issue tale follows the misadventures of Briar Rose immediately after the events of Fables #107(collected in Fables Volume 16: Super Team), in which she was stolen away by the goblin army. Following this first collection, Willingham will serve as a consultant on all story arcs and introduce new writers from other mediums to the Fables mythos. 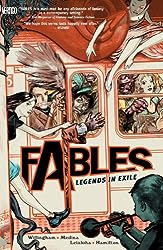 When a savage creature known only as the Adversary conquered the fabled lands of legends and fairy tales, all of the infamous inhabitants of folklore were forced into exile. Disguised among the normal citizens of modern-day New York, these magical characters have created their own peaceful and secret society within an exclusive luxury apartment building called Fabletown. But when Snow White's party-girl sister, Rose Red, is apparently murdered, it is up to Fabletown's sheriff, a reformed and pardoned Big Bad Wolf, to determine if the killer is Bluebeard, Rose's ex-lover and notorious wife killer, or Jack, her current live-in boyfriend and former beanstalk-climber.
AWARDS:
YALSA: 2004 annual recommended list of Quick Picks for Reluctant Young Adult Readers
·Willingham, Bill. Animal Farm (Fables series). DC Comics: Vertigo.
·Willingham, Bill. Legends in Exile (Fables series). DC Comics: Vertigo.
YALSA: 2007 Great Graphic Novels for Teens
·Willingham, Bill, Todd Klein, and others. Fables: 1001 Nights of Snowfall. 2006. DC Comics/ Vertigo
As of 2008, Fables has won twelve Eisner Awards.
·Best New Series in 2003
·Best Serialized Story in 2003, 2005 and 2006 (Legends In Exile, March of the Wooden Soldiers and Homelands)
·Best Anthology in 2007 (Fables: 1001 Nights of Snowfall)
·Best Short Story in 2007 (A Frog’s Eye View, by Bill Willingham and James Jean, in Fables: 1001 Nights of Snowfall)
Hugo Award Nomination 2009:
·Fables: War and Pieces was nominated for the first Hugo Award for Best Graphic Story 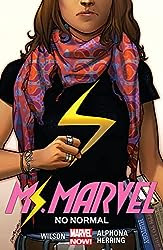 is also $2.99 which I bought out of curiosity. This title particularly interests me as the rebooting of Ms. Marvel as a sixteen year old Muslim girl living in New Jersey. This is one of Marvel's attempts--considered successful--to provide comics marketed towards a younger female audience without the sexed up, impossible costumes. This was a hot topic a few months ago when What Taking My Daughter to a Comic Book Store Taught Me was published. For me, it's always been a hot topic since I have been visiting comic books stores most of my life, either with my brother or for myself and now for my nephew. Many of those years were with my brother or for some other reason, not for myself, for the reasons addressed in that very article. Not getting further into it here, but I bought this. Out of gratitude. And sent it to my niece's Kindle. Because she isn't interested in comic books, only anime. But it also explains my adoration for Felicity on Arrow, and Arrow in general, since overall they are getting women right on that show and that is the only way The Flash is failing me. And let's not even talk about the movies, but Josh Whedon does it for me. And, yes, Agents of Shield is doing fine, with Agent Carter, too, if only those shows were better overall. I've stuck with them because the hubby is devoted to Marvel Universe and I am devoted to watching tv with him. But two seasons to get to a superhero?
Posted by SurLaLune Fairy Tales at 7:44 AM