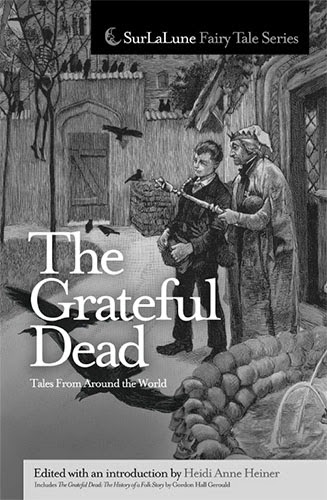 Yesterday I provided the short answer to the question, "So what is a Grateful Dead tale?" Today I provide the beginning of a longer answer. Here is another excerpt from my introduction to The Grateful Dead Tales From Around the World.

To further demonstrate the difficulties in finding one definitive Grateful Dead tale, it is helpful to have a basic understanding of the tale typing classification system. A motif is a distinctive and recurring idea or subject in a literary piece. In 1955-58, Stith Thompson published an extensive catalog of folklore motifs for classification purposes. The Grateful Dead motif (E341), as designated in his Motif Index of Folk Literature, appears in several tale types. The most common E341 motif is E341.1: Dead grateful for having corpse ransomed. This is the primary motif explored in the present volume of tales. Here are the grateful dead motifs classified by Thompson:

In 1910, folklorist Antti Aarne created a system to classify types of Scandinavian folktales and published it with the title, Verzeichnis der Märchentypen (Index of Folktale Types). Stith Thompson later adapted the system in 1928 and again in 1961 with the title, The Types of the Folktale: A Classification and Bibliography which also incorporated the motif system he had developed in his Motif Index of Folk Literature. Although other folklore classification systems exist, this system has become the most widely used in folklore scholarship despite its flaws, especially its European-centric limitations. Tale types are designated in this system with the AT designation followed by a classification number, such as AT 505.

Norm Cohen in his introduction to the University of Illinois Press’ reprint (2000) of Gerould’s The Grateful Dead, provides a chart of the AT tale types present in Gerould’s list of Grateful Dead tales. A new chart based upon Cohen’s work is offered in the backmatter of this book. Generally, the AT 505-508 tales were grouped as The Grateful Dead, so a more detailed listing of those tale types, as well as the other tale types that most often include a Grateful Dead helper (E341.1), are listed here:

In 2004, Hans-Jörg Uther further revised the AT system, both streamlining and expanding it, with the publication of The Types of International Folktales: A Classification and Bibliography. The system has been adopted in current scholarship and now most tale typing includes the ATU designation to denote usage of the updated tale types. Uther’s changes affected several of the original AT tale types related to the Grateful Dead. The new designations now appear as:

The greatest difference between the two systems is that AT 505-508 is no longer designated as the Grateful Dead grouping with many of the previous tale types folded into the ATU 505 type. The table of Gerould’s tales and their tale types offered in this book’s end matter uses a blend of the AT and ATU systems to produce a more intricate breakdown of the different themes offered in Grateful Dead tales. Uther’s updated system is generally more logical for folklore studies as a whole, but it removes the nuances of some of the Grateful Dead AT tale types by combining them, making it more difficult for the scholar intent on examining the different themes that are found in Grateful Dead tales.