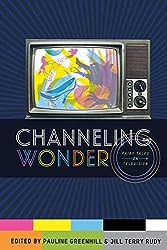 edited by by Pauline Greenhill and Jill Terry Rudy is the newest release in the Series in Fairy-Tale Studies from Wayne State University Press.

If you are interested in fairy tale in film, especially TV, this is a book for you. This is one of the first academic book publications--perhaps the first actually--to have academic articles about both NBC's Grimm and ABC's Once Upon a Time. Other shows are represented, too, and not always the usual suspects. Jim Henson's The Storyteller

series is studied. So is Rodgers & Hammerstein's Cinderella (1957 Television Production)

Even PBS's Super Why!

is included which has had several fairy tale retellings in its series. Other tales and their interpretations are within, too, from Snow White to Bluebeard to Hansel and Gretel. And, never fear, not just American television is included. While the articles tend to be centered around Hollywood, there are others, such as offerings about Japanese interpretations.

I considered retyping the table of contents, but since it is viewable by looking inside the book on Amazon, I decided to spare myself the time. But take a look there and see what a great resource this book is.

In addition--and for me the best part--the book offers a great guide and one of the most comprehensive lists of fairy tales interpreted on film, broken down into these categories:

I received a review copy of the book and these lists are where I spent my initial time with the book. I love lists like this and the ones in this book are great. I found a few gems I didn't know about. So yes, I highly recommend this one. There are not many resources for academic studies of fairy tales in television and this is a substantial contribution to that area of study.

Television has long been a familiar vehicle for fairy tales and is, in some ways, an ideal medium for the genre. Both more mundane and more wondrous than cinema, TV magically captures sounds and images that float through the air to bring them into homes, schools, and workplaces. Even apparently realistic forms, like the nightly news, routinely employ discourses of "once upon a time," "happily ever after," and "a Cinderella story." In Channeling Wonder: Fairy Tales on Television, Pauline Greenhill and Jill Terry Rudy offer contributions that invite readers to consider what happens when fairy tale, a narrative genre that revels in variation, joins the flow of television experience.

Looking in detail at programs from Canada, France, Italy, Japan, the UK, and the U.S., this volume’s twenty-three international contributors demonstrate the wide range of fairy tales that make their way into televisual forms. The writers look at fairy-tale adaptations in musicals like Rodgers and Hammerstein’s Cinderella, anthologies like Jim Henson’s The Storyteller, made-for-TV movies like Snow White: A Tale of Terror, Bluebeard, and the Red Riding Trilogy, and drama serials like Grimm and Once Upon a Time. Contributors also explore more unexpected representations in the Carosello commercial series, the children’s show Super Why!, the anime series Revolutionary Girl Utena, and the live-action dramas Train Man and Rich Man Poor Woman. In addition, they consider how elements from familiar tales, including "Hansel and Gretel," "Little Red Riding Hood," "Beauty and the Beast," "Snow White," and "Cinderella" appear in the long arc serials Merlin, Buffy the Vampire Slayer, and Dollhouse, and in a range of television formats including variety shows, situation comedies, and reality TV.