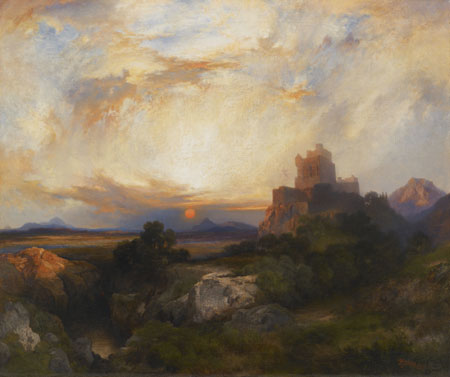 . I really couldn't fit everything in there as much as I wanted to. Today, since I am hoping to attend the Tennessee Renaissance Festival, I had castles on the brain and thought this painting would be a perfect thing to share. (There is a castle at the TN Ren Faire. It's only a few decades old, but it's a castle.)

This painting by Thomas Moran is owned by the Heckscher Museum of Art in Huntington, NY. Once again this demonstrates how much better known Bluebeard was a hundred years ago, thanks in part to all of the plays and operas surrounding it.

From the painting's information page:

Thomas Moran painted several romantic works based on literary sources. In the 1890's, he painted scenes from The Odyssey and The Arabian Nights, which were well received by critics. Inspired by the 1697 Charles Perrault fairytale about the ogre Bluebeard who killed his wife when her curiosity compelled her to disobey his orders, Bluebeard's Castle bears close resemblance to the scenes of Scottish castles which Moran painted following a 1910 sketching trip to England. They share a romantic approach, depicting an isolated castle enshrouded in an atmospheric haze, recalling the light effects of the English painter J.M.W. Turner.

Would you be willing to marry a man with a blue beard to live there?
Posted by SurLaLune Fairy Tales at 5:00 AM