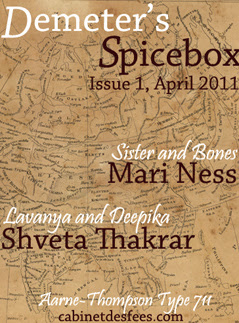 Issue One of Demeter’s Spicebox was published in April and it focuses on a lesser known fairy tale, Tatterhood, ATU 711. This is all part of the wonderful work taking place at Cabinet des Fées online. There's so much going on, I haven't kept up, but I am impressed whenever I remember to stop by. You should soon, like now!

Here's a little bit more about it:

For the inaugural issue of Demeter’s Spicebox, we wanted to revisit a tale that stands poised in between the active or passive heroine. Tatterhood, or the Aarne-Thompson folktale type 711, is a tale about both motherhood and what it means to be either the beautiful or ugly twin. The original folktale, as collected by Peter Christen Asbjørnsen and Jørgen Moe, was a favourite of mine as a teenager. How could it not be? It was a tale that was refreshing in that the active and not attractive heroine prevails, but it also captures that insecurity that lies at the heart of every person who has felt marginalised, Othered or has been considered unattractive.

While Hans Christian Anderson’s Ugly Duckling and some other stories which speak of that transformation between ugliness and beauty espouse waiting, self-discovery, and to a certain extent, passivity, the heroine of Tatterhood seems to know a secret, and is active in furthering not just her destiny, but that of her loved ones. This is not just an empowering message in a folktale; it is a delectably subversive one, as well. So, would writers be able to subvert this even further? It appears as if they could, and would.

Both Shveta Thakrar and Mari Ness have given us beautiful versions of Aarne-Thompson type 711, presented with a twist. These are tales that will stir your imagination and evoke emotional reactions. Mari Ness’s lyrical and moving Sister and Bones takes us to the Far East in a story of sisterhood, loss and triumph. Shveta Thakrar’s Lavanya and Deepika brings us back in time to Ancient India, in a story which is lush and lyrical, with imagery that transports. Both tales share a harmony in thematic concerns, and both writers have woven in different fairytales within the Aarne-Thompson type 711 tale they reworked. They have defied our expectations of both activity and passivity by writing stories which are a powerful testimony not just to wonder and magic, but to the strength of human relationships and filial ties. Both writers are therefore exactly what the inaugural issue of Demeter’s Spicebox needed and we are delighted to feature them.