The Story Behind the Stories: A History of the Fairy Tale Princess by Angela “Cookie” Oswald 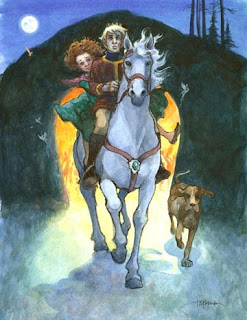 Kate Crackernuts by Trina Schart Hyman from The Serpent Slayer

*
Okay, this one made me happy all around. It is about fairy tales receiving the proper perception and it comes out of Maryville where I lived when I started SurLaLune. Maryville is about a fifteen minute drive from the UT Knoxville campus--or it was then--I don't know how many more lights might be along the Alcoa Highway now. John and I lived in a little cottage along a river, our little house of dreams as newlyweds back then. So cool beans and such but keep reading to see why I am even happier about the news story.
From MC history major receives top undergraduate award for essay by Chloe Kennedy:

Maryville College senior Angela “Cookie” Oswald won the “Top Undergraduate Paper Award” for her essay, “The Story Behind the Stories: A History of the Fairy Tale Princess,” at the Tennessee regional meeting of Phi Alpha Theta, a national history honor society.

Oswald, who is double majoring in history and English literature with a minor in American studies, presented an excerpt from her Senior Study, a 300-page “feminist, socio-cultural and historicist interpretation” of 12 fairy tales and folk tales she collected from France, Great Britain and Italy.

“I am particularly interested in doing research concerning the common misconception that most princess characters have been ‘damsel in distress’- type personalities until the Women’s Liberation Movement, when stronger female characters began to emerge in popular fairy tales,” said Oswald, MCHS president. “My argument is that strong female characters in fairy tales have always existed; they have just been forgotten or ignored over time, especially due to the influence of the Victorian era.”

Oswald said she agonized for weeks over which section of her thesis to present at the conference, and she ultimately chose one French fairy tale from the second chapter of her thesis.

When Oswald presented, she was “very pleasantly surprised” by the positive reaction from the judges – two professors who specialize in women’s history.

Oswald’s paper and presentation received the highest score among all of the undergraduates who presented, earning the “Top Undergraduate Paper Award.”

Now I really want to read her paper and thesis. Congrats to Angela “Cookie” Oswald and thank you for furthering the fairy tale cause!

*Because Kate Crackernuts is a strong fairy tale heroine!
Posted by SurLaLune Fairy Tales at 7:00 PM