Hoodwinked Too! Hood vs. Evil 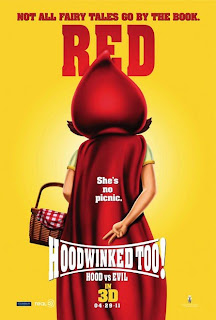 So did anyone see Hoodwinked Too! Hood vs. Evil  this weekend? I didn't, but I was tempted. I finally saw Jane Eyre* the weekend before which was my movie attending limit for April. The reviews weren't great for it, but not horrible either. After all, it is what it is and this isn't one that would receive strong reviews unless it snuck in a lot of clever adult humor the way Shrek did.

Here's the trailer again. I have seen a few of the commercials on tv and have giggled at them so I hope the movie sustains some of the fun.

And if you interested, Hoodwinked is a fun one and a good price right now. If I have time, I will rewatch it before I eventually see the new one because I will.

*And, no, although it was visually wonderful, I didn't care for this new Jane Eyre. If you want a diatribe let me know in the comments, but it wasn't my Jane Eyre and came the closest to Bluebeard of any version on film, IMHO. And even as someone who is releasing a rather large book of Bluebeard tales, that wasn't what I wanted. I had to rewatch two other versions this week--Jane Eyre (Masterpiece Theatre, 2006)

--to cleanse my soul.
Posted by SurLaLune Fairy Tales at 9:36 AM