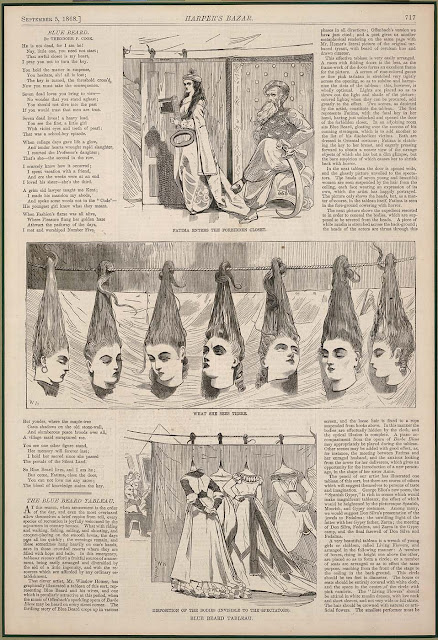 First of all, Happy Mother's Day!

Looking for some light home entertainment for this evening? Here is a recommendation from Harper's Bazaar in 1868: A Bluebeard Tableau!

During my research for Bluebeard Tales From Around the World, I discovered this gem which has delighted me no end. It consists of a poem by Theodore P. Cook along with instructions and illustrations for how to present the story to an audience for an evening's entertainment. Ah, what they did in the olden days before tv to entertain each other! And extra bit of the charm is that the illustrations are by Winslow Homer which has thus merited a copy of the page's inclusion in some museum collections, such as the Smithsonian from where the above image was borrowed. As happened so often back then, this same article appeared in a UK publication, too, but with different illustrations and a slightly different edit.

Don't you want to entertain your family and friends with images of decapitated heads tonight? And these days so many women don't have long hair so rounding up seven women to create this image would be a challenge within itself. Unless wigs are readily available, I guess.

I included the full text as well as Homer's illustrations in Bluebeard Tales From Around the World in the poetry section.

Posted by SurLaLune Fairy Tales at 9:46 AM