The Blue-Beard Chambers of the Heart by E. Spencer Miller 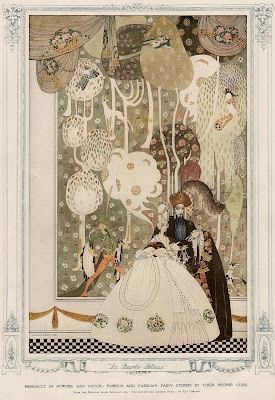 The Blue-Beard Chambers of the Heart
by E. Spencer Miller

MOULD upon the ceiling,
Mould upon the floor,
Windows barred and double barred,
Opening nevermore;

Spiders in the comers,
Spiders on the shelves,
Weaving frail and endless webs
Back upon themselves;

Weaving, ever weaving.
Weaving in the gloom,
Till the drooping drapery
Trails about the room.

Waken not the echo,
Nor the bat, that clings
In the curious crevices
Of the pannelings.

Waken not the echo.
It will haunt your ear
Wall and ceiling whispering
Words you would not hear.

Hist! the spectres gather,
Gather in the dark.
Where a breath has brushed away
Dust from off a mark;

Dust of weary winters,
Dust of solemn years,
Dust that deepens in the silence,
As the minute wears.

On the shelf and wainscot,
Window-bars and wall,
Covering infinite devices,
With its stealthy fall.

See,—they pause and listen,
Where the bat that clings,
Stirs within the crevices
Of the pannelings.

See,—they pause and listen,
Listen through the air;
How the eager life has struggled,
That was taken there;

See,—they pause and listen,
Listen in the gloom;
For a startled breath is sighing,
Sighing through the room.

Sighing in the corners,
Sighing on the floor,
Sighing through the window-bars,
That open nevermore.

Waken not those whispers;
They will pain your ears;
Waken not the dust that deepens
Through the solemn years—

Mr. E. Spencer Miller is a son of the late eminent theologian, the Reverend Samuel Miller, D.D., of Princeton, New Jersey, where he was born on the third day of September, 1817. When nineteen years of age he was graduated at Nassau Hall, in his native town, and having studied the law, and been admitted to the bar, in Philadelphia, chose that city for his residence, and has attained to a distinguished position there in his profession.
Mr. Miller has not hitherto been known to the public as a poet. The only book upon the title page of which he has placed his name, is a stout octavo called “A Treatise on the Law of Partition, by Writ, in Pennsylvania,” published in 1847; but while engaged in researches concerning this most unpoetical subject, in leisure hours his mind was teeming with those beautiful productions which were given to the world in 1849, in a modest anonymous volume entitled “Caprices.” Among these poems are some that evince an imagination of unusual sensibility and activity, and in all are displayed culture and wise reflection. No one of our poets has made a first appearance in a book of greater promise, and it will be justly regretted if devotion to the law or to any other pursuit prevents its accomplished author from keeping that promise to the lovers of literature.

And, yes, this is in Bluebeard Tales From Around the World.