Bluebeard by George Colman the Younger 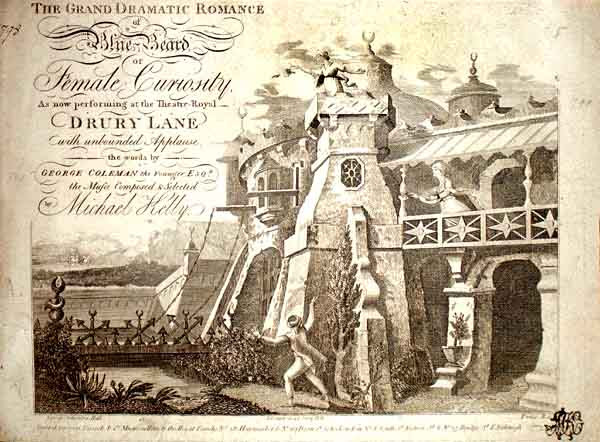 We often accuse Hollywood of being uncreative and unimaginative, constantly recycling popular films with sequels or remakes. It's a valid accusation but not a new one. It's been a trend with those who produce theatre and entertainment (books included) for centuries. Bluebeard provides a great example of this.

I had no intention of including plays in the mix. Then I started reading them and reading about them and I knew I had to include some for they play an important role in Bluebeard's history. One could easily argue that the many, many productions of Bluebeard stories on the stage maintained its visibility and popularity in the 1800s. One of the most important and influential is Bluebeard by George Colman the Younger. From my introduction:

George Colman the Younger’s Blue-beard; or, Female Curiosity! A Dramatick Romance (1798) is often credited with popularizing the portrayal of Bluebeard as a Turk in future literature and illustrations. It didn’t create the trend but built upon the Turkish elements in a French production, Raoul Barbe Bleue (1789) by André Modeste Grétry and Paul Sedaine as well as the growing popularity of the Arabian Nights during that era. Colman’s play served as inspiration to many burlesques and operettas that followed in the 1800s, a few of which are included here.

There were many reasons for giving the production a Turkish setting--too many to discuss here or in my introduction--but it proved an unforgettable choice. The play was a smash hit and cemented the perception of Bluebeard as a Turk--turban, scimitar, and all. I'm oversimplifying the play's influences for the sake of brevity, but there were countless productions of Colman's play--musical actually--as well as remakes and rewrites and spoofs and references throughout the 19th century. Just as Disney influences what we see today about the fairy tales it has produced, Colman's Bluebeard influenced several generations and their perception of Bluebeard to the point where Perrault's popular tale was not as well known as this play by the less literate. There was clever writing and fun songs and a thrilling story.

To read more about the work as well as what it influenced, I highly recommend Bluebeard: A Reader's Guide to the English Tradition

by Casie E. Hermansson. (It's about much more than that, so I recommend it all around.) And of course, I included the full text of several of the plays in Bluebeard Tales From Around the World.

You can hear piano only renditions of the music from the play at Romantic-Era Songs and even over two centuries later one can understand how this musical caught the public's attention. Never underestimate the power of some catchy tunes. The score was by Michael Kelly.


And here is a very short excerpt from the play, a piece that is often collected in poetry anthologies that was extracted from the play:

A FOND husband will, after a conjugal strife,
Kiss, forgive, weep, and fall on the neck of his wife.
But Abomelique’s wife other conduct may dread;
When he falls on her neck, ’tis to cut off her head.

How many there are, when a wife plays the fool,
Will argue the point with her calmly and cool;
The bashaw, who don’t relish debates of this sort,
Cuts the woman as well as the argument short.

But whatever her errors, ’tis mighty unfair
To cut off her head just as if ’twere all hair;
For this truth is maintained by philosophers still,
That the hair grows again but the head never will.

And among all the basest, sure he is most base
Who can view, then demolish, a woman’s sweet face!
Her smiles might the malice of devils disarm:
And the devil take him who would offer her harm!
Posted by SurLaLune Fairy Tales at 10:10 AM