Princess and the Pea Games 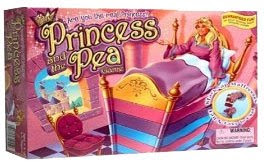 So, yes, there are TWO board games for children inspired directly by Princess and the Pea, quite different and I'm not sure which one is more fun. I don't own and haven't played either, but the reviews are overall favorable for both, although they are most recommended for the under five-years-old set. I just know I would have adored the games as a child and am still charmed by them decades later. 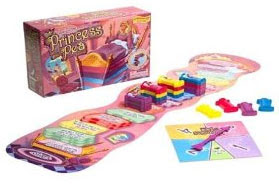 The first, Princess and the Pea Board Game, is more of a traditional board game where you add mattresses to your own bed as you move along the board.

Just like Hans Christian Anderson's beloved fairy tale "The Princess and the Pea," the prince is searching for a real princess. In this game you move your bed along the board adding mattresses to it as you go. To win you need to build the highest bed and reach the special "crown" space! Are you the real princess? 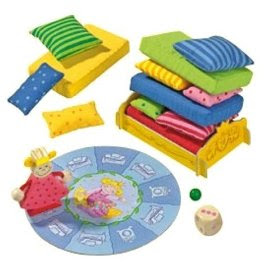 The second game, Sleepy Princess and the Pea, appears to be more of a variation on Jenga where all players build the one bed with mattresses and try not to let it topple over.

Is she really a princess? the queen asks herself as she makes a tricky challenge to test the damsel. You are the queen's eager helpers and you must prepare the bed for the little princess. You have to be careful and skillful as the queen wants her to sleep on a wobbly pile of mattresses. Together you try to help the princess with the stacking of the mattresses. This game includes 2 fairy tale games of skill for 2 - 4 players ages 3-12 with the fairy tale "The Princess and the Pea" a story to read again and again.

So both games have used the same theme but differently. Both are also well-reviewed and recommended by parenting groups. Note that neither are Disney princess games either. Impressive.
Posted by SurLaLune Fairy Tales at 6:00 AM

Labels: Princess and the Pea