Little Red Riding Hood, that versatile girl, is appearing in a new, unsual video game that was featured on NPR's All Things Considered this week. You can read the article at: On 'The Path,' Everything A Big Bad Wolf Could Want by Heather Chaplin

The game itself is interesting, not one I have ever read about, but it definitely won't be for everyone since it goes beyond light escapist entertainment and unabashedly calls itself a horror game. However, it sounds like it can be an empowering experience for players interested in it. 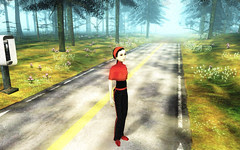 The point of the game is to face the wolf and deal with him, facing the dangers of girlhood and womanhood, often very real ones. In my mind, after exploring the links, I thought of it as the female version of Call of Duty, one of the video games that is too real and can be traumatic for veterans. The Path uses Little Red Riding Hood to recognize and confront the dangers of everyday living for girls.

"I think we've succeeded in making a game that's about the player," says Samyn [one of the game's creators]. "What's frightening about it is the confrontation with your own interpretation of things, and probably realizing that they're your own."

The official game site is here: The Path. The game is available for either Windows or MAC platforms.

In case you're wondering if it might be too dark, the makers have this warning on it:

For Ages 15+. While The Path does not contain any graphic violence or sexuality, it does allude to these themes. The overall melancholy mood of the game and the potentially unsettling course of events, make The Path unsuitable for children.

Posted by SurLaLune Fairy Tales at 6:00 AM