New Book: West of the Moon by Margi Preus 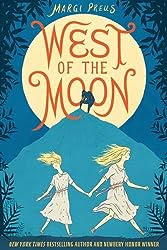 West of the Moon

by Margi Preus was released this month. The novel borrows from several fairy tales, primarily Norwegian, such as King Valemon, The Twelve Wild Ducks, Soria Moria Castle, and, of course, East of the Sun, West of the Moon.

Can I just say my Norwegian blood is clamoring for me to read this? But I am trying to finish my own books right now? This one will hopefully be of interest to my niece Leighton this summer and we can then read it together. I'm a quarter Norwegian after all. Which makes her an eighth.

In West of the Moon, award-winning and New York Times bestselling author Margi Preus expertly weaves original fiction with myth and folktale to tell the story of Astri, a young Norwegian girl desperate to join her father in America.

After being separated from her sister and sold to a cruel goat farmer, Astri makes a daring escape. She quickly retrieves her little sister, and, armed with a troll treasure, a book of spells and curses, and a possibly magic hairbrush, they set off for America. With a mysterious companion in tow and the malevolent “goatman” in pursuit, the girls head over the Norwegian mountains, through field and forest, and in and out of folktales and dreams as they steadily make their way east of the sun and west of the moon.

Praise for West of the Moon

"Like dun silk shot thought with gold, Preus interweaves the mesmerizing tale of Astri’s treacherous and harrowing mid-nineteenth-century emigration to America with bewitching tales of magic. A fascinating author’s note only adds to the wonder."
--Booklist, starred review

"Enthralling and unflinching, this historical tale resonates with mythical undertones that will linger with readers after the final page is turned."
--School Library Journal, starred review

"Astri is like a girl out of a fairy tale, and the native folktales that Preus weaves through the narrative serve as guides, lessons, and inspiration for her."
--Publishers Weekly, starred review

"Several Norwegian folktales are seamlessly integrated into the fast-paced, lyrically narrated story, which features a protagonist as stalwart and fearless as any fairy-tale hero."
--The Horn Book Magazine, starred review

Labels: books, East of the Sun and West of the Moon, Norway