New Book: The Hero's Guide to Being an Outlaw by Christopher Healy 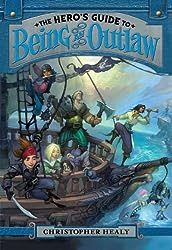 The Hero's Guide to Being an Outlaw

by Christopher Healy will be released tomorrow.

As I mentioned before, this was a definite preorder for me, especially for my 11-year-old niece Leighton who has loved the series. She read the first book--The Hero's Guide to Saving Your Kingdom

(which is bargain priced right now for $1.99 ebook)--during her visit at Christmas 2012 and my copy went home with her after her puppy dog eyes look. Which she does not use very often--she's not that type of child actually and doesn't reread books nearly as often as I do. I had listened to her laugh and laugh while reading it, so I knew it was a happy, fun book for her voracious reading tastes. And it is. She reads everything from Rick Riordan to Dork Diaries to college level nonfiction regularly and isn't impressed with too much in her jaded reading experience already. Her biggest literary crush is Sherlock Holmes actually.

Another SurLaLune reader mentioned that it's nice to have the princes/heroes DOING something for once, which is also refreshing I admit. This should be a fun read for the boys and girls in your life including yourself.

The League of Princes returns in the hilariously epic conclusion to the hit series that began with Christopher Healy's The Hero's Guide to Saving Your Kingdom, which the Los Angeles Times called "one of the more clever, hilariously successful incarnations of the current literary rage to rip apart and rewrite fairy tales."

Prince Liam. Prince Frederic. Prince Duncan. Prince Gustav. You think you know those guys pretty well by now, don't you? Well, think again. Posters plastered across the thirteen kingdoms are saying that Briar Rose has been murdered—and the four Princes Charming are the prime suspects. Now they're on the run in a desperate attempt to clear their names. Along the way, however, they discover that Briar's murder is just one part of a nefarious plot to take control of all thirteen kingdoms—a plot that will lead to the doorstep of an eerily familiar fortress for a final showdown with an eerily familiar enemy.

Posted by SurLaLune Fairy Tales at 10:54 AM