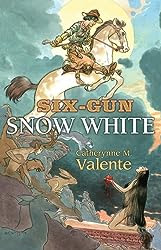 The 2014 Hugo Nominations have been announced and one is fairy tale related!

by Catherynne M. Valente has been nominated for Best Novella. Congrats!

The above image links to the hardcover, limited edition book which is already out of print and costly. The good news is that the novella is available for preorder in ebook format with a May 15th release date. There's no cover art for it yet, but I am partial to the original cover by Charles Vess (wonderful artist and a nice one, too!) and hope it will reappear in some form on the ebook version.

From New York Times bestselling author Catherynne M. Valente comes a brilliant reinvention of one the best known fairy tales of all time. In the novella Six-Gun Snow White, Valente transports the title s heroine to a masterfully evoked Old West where Coyote is just as likely to be found as the seven dwarves.

A plain-spoken, appealing narrator relates the history of her parents--a Nevada silver baron who forced the Crow people to give up one of their most beautiful daughters, Gun That Sings, in marriage to him. With her mother s death in childbirth, so begins a heroine s tale equal parts heartbreak and strength. This girl has been born into a world with no place for a half-native, half-white child. After being hidden for years, a very wicked stepmother finally gifts her with the name Snow White, referring to the pale skin she will never have. Filled with fascinating glimpses through the fabled looking glass and a close-up look at hard living in the gritty gun-slinging West, readers will be enchanted by this story at once familiar and entirely new.