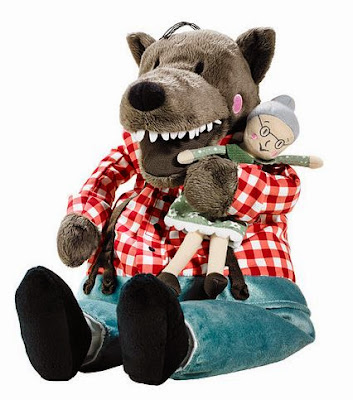 So a few weeks ago I was in Ohio and stopped into the Ikea there--because there isn't one in Nashville! silly Ikea!--and didn't really expect to walk out with anything fairy tale, but I did.

Above is the Lufsig, a wolf doll with a little grandma. Now, this seems odd at first--and second and third--especially since there is no accompanying Red Riding Hood to make a set. Nope, this is just a wolf and granny.

But the kicker--and my niece Leighton and I discovered this after a little play instead of reading labels--is that the WOLF CAN EAT GRANDMA. Yes, the toy is designed to stuff grandma down the wolf's gullet. But never fear, his shirt unbuttons and you can rescue grandma. So the child gets to be the huntsman or even Red Riding Hood in this scenario and rescue the granny from the wolf's belly.

It's deliciously sick and is being marketed as empowering to children. I'll let you decide.

Your child can have fun recreating the fairytale by rescuing the grandmother from the wolf’s belly, safe and sound.


But wait! There's more! I am late to the game--and many of you perhaps have already heard about this toy--but this has also become a sell-out hit in Hong Kong. From How the Ikea Wolf became a political hero in Hong Kong:

In Hong Kong, a kids' big bad wolf soft toy with the characteristically friendly-sounding Swedish name "Lufsig" has become an unlikely symbol of political dissent. Lufsig has sold out in the territory's three Ikea stores, has racked up over 46,000 "likes" on its own Facebook page and was last seen being chucked at Hong Kong's chief executive CY Leung during a town hall meeting.


I didn't know this. But now I am even happier that this toy came home with me. It almost didn't. "You don't need another fairy tale toy," I told myself. But it was so wonderfully perverse and giggle worthy done up in cuteness for a $10 price tag. I couldn't resist.

And so Lufsig has been grinning at me from across my office--granny halfway down his gullet--for two weeks now. He's become one of my favorite fairy tale toys. I didn't used to be this grotesque, but fairy tales will do that to you. If you're reading the right ones.

I've been putting off this post, by the way, because I wanted to take some pictures of my wolf eating granny--I prefer her going down feet first although the head first is more comical in some ways. But I keep not having my camera and stuff convenient. Go ahead and search for images--there are plenty out there--Lufsig Ikea will be sufficient. 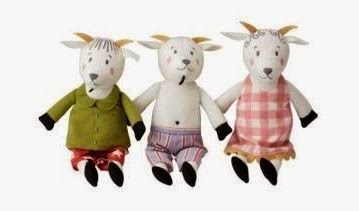 And this was part of Ikea's Soft Toy Campaign which raises money for children's education programs. There was apparently a set of Billy Goats Gruff, too, but darn it! They weren't in the Ikea I visited. The fairy was there, but Leighton got to take home that one and it matched her room perfectly colorwise. I want those goats since that is my go to story for sharing with children. My other niece, Kensie, currently adores it when she's not singing songs from Frozen. 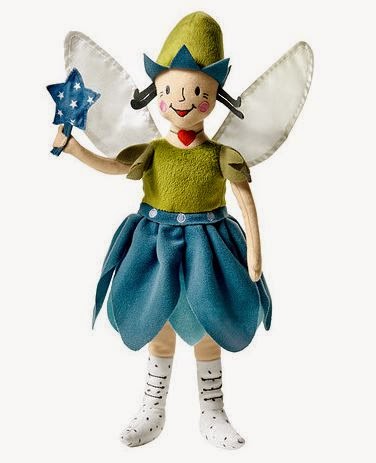