New Book: Spellbound: The Fairy Tale and the Victorians by Molly Clark Hillard 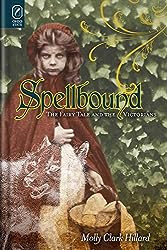 Spellbound: The Fairy Tale and the Victorians

by Molly Clark Hillard was released a few weeks ago. I haven't seen a copy to review it yet, but it looks very interesting. The sections devoted to Sleeping Beauty and Little Red Riding Hood are especially compelling for me as well as the conclusion about Andrew Lang. Table of contents is listed below the book description.

“In her promising new book, Molly Clark Hillard clearly shows how seemingly authorless fairy tales affected the way many Victorians saw the world. She argues that, though nostalgia for a world that probably never existed played a part in the Victorian reception of fairy tales, they were also intricately bound up in Victorian ways of thinking about politics, finance, and manufacturing.” —Elizabeth Wanning Harries, Helen and Laura Shedd Professor Emerita of Modern Languages, Smith College

“As Molly Clark Hillard convincingly reveals, the Victorians managed to make the fairy tale central to their understanding of their own progressive modernity by asserting its antiquated qualities, all while celebrating their modern distance from such things as fairy tales. I predict her book will have a broad relevance in fields from children’s literature studies and the emerging field of interdisciplinary childhood studies to nineteenth-century and comparative literature.” —Troy Boone, University of Pittsburgh

In examining the relationship between fairy tales and Victorian culture, Molly Clark Hillard concludes that the Victorians were “spellbound”: novelists, poets, and playwrights were self-avowedly enchanted by the fairy tale, and, at the same time, literary genres were bound to the fairy tale, dependent upon its forms and figures to make meaning. But these “spellbound” literary artists also feared that fairy tales exuded an originative power that pervaded and precluded authored work. Victorians resolved this tension by treating the form as a nostalgic refuge from an industrial age, a quaint remnant of the pre-literacy of childhood and peasantry. However, Spellbound: The Fairy Tale and the Victorians demonstrates that fairy stories, rather than operating outside of progressive modernity, significantly contributed to the language and images of industrial, material England. Hillard challenges the common critical and cultural misconception (originating with the Victorians themselves) that the fairy tale was a quaint and quiescent form.

Through close readings of the novels of Dickens, Eliot, and Charlotte Brontë; the poetry of Tennyson and Christina Rossetti; the visual artistry of Burne-Jones and Punch; and the popular theatricals of dramatists like Planché and Buckingham, Spellbound opens fresh territory into well-traversed titles of the Victorian canon. Hillard reveals that these literary forms were all cross-pollinated by the fairy tale and that their authors were—however reluctantly—purveyors of disruptive fairy tale matter over which they had but imperfect control.

Part 1. Matter
1 The Novelist and the Collector 23
2 Pickwick Papers and the End of Miscellany 38
3 The Natural History of Thornfield 50
4 Antiquity, Novelty, and The Key to All Mythologies 61

Posted by SurLaLune Fairy Tales at 10:09 AM